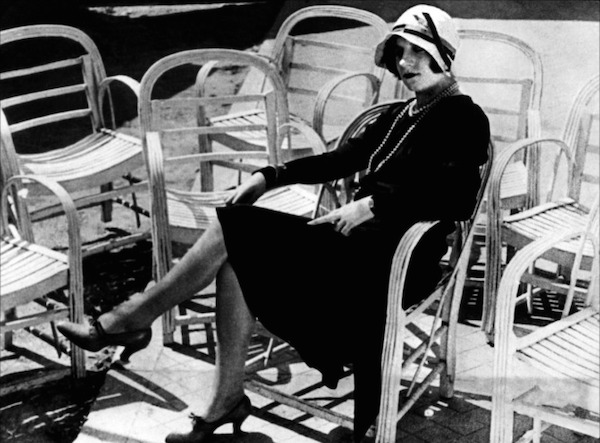 Jean Vigo’s debut film falls very much into his idea of “social cinema.” He was a leftist (specifically an anarchist with communistic leanings), which I’ll talk about in more detail later. He was driven to film as a means of expressing his political world view.

À Propos de Nice is a silent documentary short, but it is unlike most of the ones you’ve likely seen. There are no title cards and little actual narrative. It is more of a slice of life documentary about the coastal town of Nice, France. It shows the flow of rich vacationers contrasted with the locals that put on a show for them, and reaches a crescendo that makes a thinly veiled political statement.

The beginning shows a number of upper class, upper crust people lazily enjoying the sun-drenched city. Some are simply walking and looking distinguished; others are enjoying a book on a beach chair; while others are taking sun naps. Occasionally Vigo will show a lower class citizen just to keep the viewer’s attention. For instance, between shots of opulence in action, there is a shot with a garbage collector. There is another shot with a clearly wealthy individual sitting in a chair, and a homeless person sits next to him. Vigo holds that shot, accentuating their differences, yet they are still both sitting idly near a gorgeous beach.

Vigo gets a little more adventurous with some daring, staged shots, which get crazier as the film goes on. There is one such scene with a lady sitting quietly in a chair. The scene cuts and we see the same lady in the same position, with a different wardrobe. It cuts again to yet another wardrobe, and continues to cut a couple more times. The last cut reveals her sitting completely nude in the same chair position. In this manner, the documentary is both jarring and humorous, which would be a constant.

Shots become more abstract as Vigo shows buildings from unusual camera angles, often sideways. He shows poor men wearing big hats, and we discover they are serving pies to their rich visitors. Finally we are shown a parade, including some large, comical figurine faces that were also shown out-of-context in the very beginning of the film. This is the real city of Nice. These are the workers that entertain the rich tourists, that depend on their livelihood and choose to look silly in order to facilitate the pleasure of the class above them.

The film ends with militarism and radical dancing. We see ladies doing the cancan, raising their legs higher in the air with each kick, threatening to reveal their hidden mysteries. These are again lower class, possibly prostitutes or at the very least loose women. Unlike the idle rich vacationers, they are partying wildly without a care in the world. They even dance over a pothole, with the camera covertly positioned inside, shooting them from below in a voyeuristic manner, even though it is obviously a staged shot.

We end with workers, soldiers, and fire. The message is clear when analyzed closely. It is at the hands of the workers that the future lies. Vigo shows them up to the task, upbeat and engaged, but the ending is not resolved. 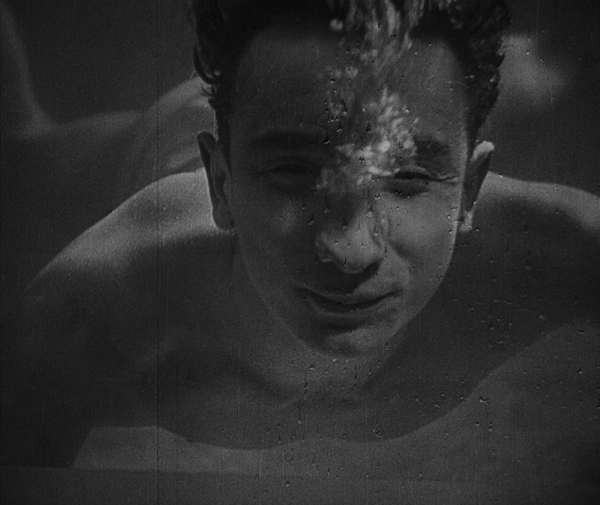 Taris stands apart from the remainder of Vigo’s work. It was a commission to profile the famous French swimming champion, Jean Taris. While it was not a vehicle for his “social cinema,” it gave him the opportunity for some technical experimentation and expression that would be used again in his two final films.

The 9-minute short is a vanity film, with Taris showing off with his diving ability and his mastery of various swimming strokes. Vigo’s film language helps portray the swimmer in the most positive light possible. He shows close-ups of him while he is working hard, the respected yet agonized face of an endurance athlete. He reverses some of the diving scenes to make it appear that he dives, and then floats back to the diving platform.

The best footage is when Taris is underwater. There is no sound, which is appropriate for underwater footage. Taris is alone in his element. We see him in close-up, holding his breath, yet still enjoying himself and preening for the camera. If there’s any doubt as to his stature, it is quashed when the diving scene and a trick dissolve makes him appear that he is walking on water. Some may have seen that sacrilege, whereas his fans probably found it appropriate. He was an athletic celebrity.

Even though this is a technically accomplished film, it exists for the sole purpose of making someone look good. That makes it the outlier of the four films that Vigo would complete in his lifetime. 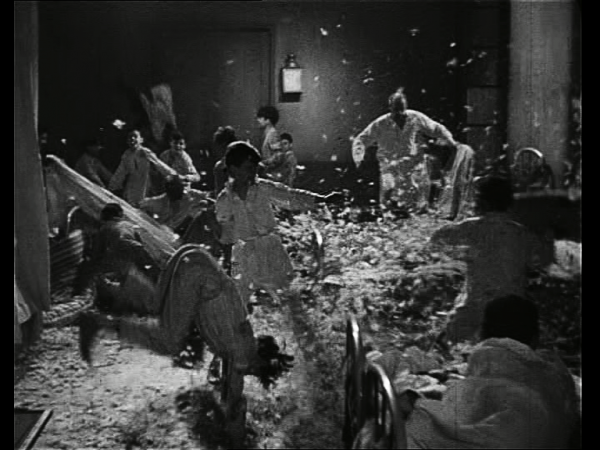 Zéro de conduite – or Zero for Conduct, as I will refer to it – is the most fully revealed of Vigo’s “social cinema.” I mentioned above that he was an anarchist. Even though his politics were complicated, Zero for Conduct helps clear them up. In some respects it is a blueprint for exactly the type of anarchic revolution that Vigo longed for, yet it takes place in the unlikely setting of a young boy’s school.

The children in the boy’s home are characters that many can relate to. They push the boundaries of authority, and try to get away with whatever they can. They are into hijinx, practical jokes, and overall misbehavior. They are not a peaceful bunch, and they give it to their teachers at every opportunity, whether to their face or behind their backs. The only exception is Monsieur Huguet, who they find as an allay and a character that understands them.

The other teachers are impatient for any mischievousness, and they rule with an iron fist. “Zero for Conduct” is the punishment for any transgression. It means that they are not given their freedom on Sundays to visit family or friends, and instead are required to stay in school at detention. Furthermore, the teachers dole out the punishment arbitrarily and unfairly. Vigo is intending to portray this as a totalitarian state where the lower class’ (or children’s) rights are being impeded.

The children may be the goats, but they also get to be the heroes. With some assistance from the friendly teacher, they lay out plans for rebellion. The planning is carefully orchestrated and is not put into action until the authority tries to compromise one of the oppressed. It begins with an expletive, continues with a rowdy food fight, and the revolt is in progress. The children hoist their flag and march with exaltation. The sense of freedom and liberation is palpable, just as Vigo expects that it would be in reality. Even though the film is of revolution, it is combined with the exuberance of childhood merrymaking.

Zero for Conduct was banned for a number of reasons. First and foremost, there is clear male nudity during the march scene. There is also the acknowledgement of a homosexual relationship between two males, one of which looks effeminate to easily be confused as a girl (full disclosure: I thought he was a she during the first viewing). Not only is it apparent on screen, but even the school officials take notice. In one scene when the pair are walking arm in arm, the headmaster tells another teacher that “we need to keep an eye on these two.” This was 1933, where the subject of homosexuality was barely even believed in common society, much less presented in the media arts. Finally, there was religious consecration as the children place one teacher in a crucifixion pose during the rebellion. This was too much for the censors.

While Zero for Conduct is an understandably controversial film that was a product of the post-Bolshevik era and Vigo’s politics, it is also far ahead of it’s time in film language. During the early years of French Poetic Realism, there had been plenty of radical images, but none that came close to Vigo’s penultimate film.

Since this entry is about only three short films from The Complete Jean Vigo disc, I am only going to cover the commentaries in this post. There will be another post about L’Atalante and a wrap-up post to come, which will cover more supplements.

All four films were producted with Boris Kaufman, brother of the filmmakers that created the legendary Man With a Movie Camera, and he had significant success after the Vigo years. He already had a great deal of film background when the collaboration began, whereas Vigo was young and inexperienced. The partnership may not have happened if Vigo had not financed À Propos de Nice with his marriage dowry. The collaboration was beneficial to both, and they grew as filmmakers, which is more than evident from the quality of their work.

Temple claims that Vigo is considered one of the more celebrated filmmakers in French film history. This is amazing given that he made a mere four films, and only one of which was a full length feature. Vigo’s work was not appreciated during his lifetime and would be rediscovered by filmmakers such as Truffaut and Godard during the French New Wave.

I’ve already referred to the term “social cinema,” which is a phrase I received another source (Republic of Images, Alan Williams.) Temple says that Vigo called À Propos de Nice a “social documentary.” It is divided into three parts: 1) Wealth. 2) Contrasts 3) Revolution. Vigo himself appeared in the cancan dance sequence, kicking his legs up with glee with both women around his arms.

Taris was the exact opposite of Apropos because it was commission. Vigo received it because of his name recognition after À Propos de Nice. He used the commission to learn more about film technique, which he would use in his two final films. The most notable items he recycled were the underwater scenes, which he shot by using portholes underneath.

The producers did not like his version and hired someone else to finish. We do not know for certain whether it is all Vigo’s work in the final film. Vigo rejected the film, but said he like underwater scenes.

Zero for Conduct was Vigo’s signature film. It was both based on his personal experience in a children’s home, and it expressed his anarchist ideology throughout the film.

Merde is a magical word in anarchist culture. It is a difficult translation from French (literally translates as “shit”), but the word is not always profane. Sometimes it is just a desire to shock or go against conventions. It is a word used within revolt.

Vigo sees anarchism and revolution as joyful, and that is eloquently presented in the film. The kids are having an absolute blast, while it is also a call to freedom.

The final confetti slow motion rebellion scene is one that Vigo borrowed from his underwater scene. If you watch it carefully, it is reminiscent of how Taris was shot with it’s subject swimming under the water.