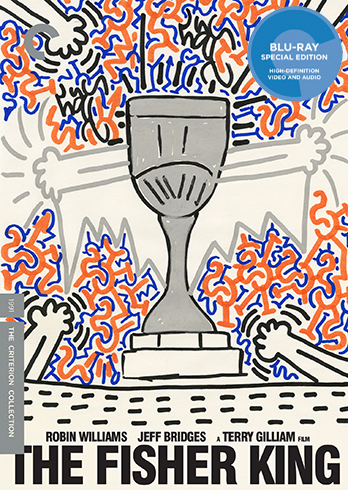 When I first heard about the release of The Fisher King, I wondered how many times I had seen it already. Even though it had been some time since my last viewing, there were too many to count. This just seemed to be the film that frequently came into my life, either on cable or video, or with friends. It’s an easily delightful and digestible film. As I began watching this new Criterion edition, I found that I practically knew every twist and turn, yet I still enjoyed it close to as much as the first time.

There are some films that are dense and reveal more with every revisit. Good examples of recent films I’ve explored are Black Narcissus and The Great Beauty. They have a level of sophistication, density, and depth that I’ve taken something new with every viewing (and for the Sorrentino, it took three for me to engage).

The Fisher King is not one of those films. That’s not to say that it is not sophisticated or artistic. It is quite an accomplished film, but the themes are overt and easy to pick up on, especially for a Gilliam film. Sometimes that is refreshing. It is not shallow by any stretch, but in a way it is like art-film version of comfort food. You can appreciate it without having to deconstruct and dissect it.

I’m not a fan of lazily using film mash-ups to describe a film, but it is tempting to do it here. For example, I could say that it is The Holy Grail meets My Man Godfrey meets Sleepless in Seattle. The reason is because the film is such a genre mash-up, and again, that contributes to the charm. It has the Gilliam-esque creativity, although somewhat muted, with a positive portrayal of the values of homelessness (and by extension, anti-commercialism) in New York City. Part of the appeal is that it effectively weaves itself between fantasy, comedy, drama, and gives an important life lesson without relying on over manipulation.

In a way it hurts to watch The Fisher King today, because it was the quintessential Robin Williams role and his passing was tragic. Some of the highs, lows and demons of his character, Parry, may have been closer to Williams’ reality.

This was when he was in the midst of a transformation from a strictly silly actor into a serious actor. He eventually became a little of both. I always found him to be a funny man, but I gained a lot of respect for him as a dramatic actor. By this time, he had already turned in two strong performances in Awakenings and Dead Poet’s Society. Later in his career he would put in good work in films such as One Hour Photo and Insomnia. As much as I’ve enjoyed him as an actor, his turn in The Fisher King is my favorite, and is a character that few other than Williams could have pulled off. It is part zany and he often is very funny, yet there is emotional trauma buried down deep, which he has to come to terms with. Meanwhile, he is an endearing character because of his values in life. Who can’t fall in love with the guy who strips in Central Park just because? We also see him as a genuine, hopeless romantic, the type that embodies the definition of chivalry. He is a crazy, disturbed, but ultimately benevolent knight in shining armor.

This was also quite a departure for Terry Gilliam, but he left his indelible stamp on the film. Few could transform New York City into a convincing template for a fantasy world, but through his direction, it becomes wholly believable. The most impressive Gilliamism is the Red Knight, which is simply a beauty to see. We get to see an excellent, original creation that is used to represent a character’s persona. We understand Parry because of how menacing this Red Knight is portrayed. His demon is fierce and relentless, with a burning fire that represents wounds that have not healed.

The entire cast is extremely good. Jeff Bridges does a fine job at portraying Jack, the smarmy, better looking Howard Stern whose ambition and thirst for success is the anti-thesis of Parry’s ideology. His straight man performance complements Williams’ manic behavior. Plummer is also good playing Lydia, an odd, quirky and shy homebody. However, aside from Williams, Mercedes Ruehl as Anne steals a lot of her scenes. She is the dramatic center, the other side of the Parry coin that drives Jack towards his character evolution. She is the one that is devoted to him, the one he can count on, but even when he is learning about life through Parry, the one he continues to mislead and mistreat.

Speaking of stealing scenes, how can you not love Michael Jeter as a homeless man? He plays a flamboyantly gay man (or so we would assume). He is about as over-the-top as they come, but he is yet another facet into the appeal and the likability of the homeless crowd. His scene where he sings on behalf of Parry to Lydia in her office is not just a scene-stealer, but is one of the most memorable performances of the movie. That scene was a riot!

Again, even if not particularly deep, the film’s message on the trappings of materialism and selfishness are interesting. Through the great performances, creative directing, and originality maneuvering through a variety of genres, we have a movie that I can watch numerous times and still find joy in it years later.

I’m not always crazy about deleted scenes as extras on discs. That was the case here. The additions were minute and it is understandable why they were cut.

The Fool and the Wounded King –

LaGravenese wanted to do something that was opposed to the cynicism that was prevalent at the time. They were also into the Holy Grail myth, and how people need a myth to love by. He wrote 4 different screenplays with the same two characters, and discovered Lydia in 2nd screenplay. Disney was involved and it was demoralizing. They basically wanted it re-written in a Disney style. They sold it to Tri-Star where it was assigned to “terrible directors.” James Cameron wanted to do it at one point, but he was in the middle of The Abyss. Tri-Star flew to London to talk Gilliam into doing something that went against his entire philosophy. He didn’t like to work with studios and liked independence and control.

People at Tri-Star had reservations about Terry Gilliam because of his last film, The Adventures of Baron Munchausen, which was seen as a disaster from a studio’s perspective. Robin Williams worked with Terry on Munchausen, so they had a rapport. We’re all lucky he agreed to do it.

The Real and the Fantastical

Jeff was being casted against type. He had played mostly likable people before. Gilliam: “Robin was in awe of Jeff” and didn’t feel like he had to be funny and outrageous. Mercedes Ruehl’s character was based on an Italian-American video store owner that the writer knew. Terry loved Mercedes for this role.

Terry was great with the locations, arranging the big visuals. He was not great with the emotional tones of the actors, but he gave them the freedom to explore. He was great with the “Red Knight” stuff. He says that the idea came from a mixture between something in Fellini’s Juliet of the Spirits and Grail legend. They were shooting in the rougher sections of New York, but Gilliam was creating a fantasy world.

Bridges talks about interacting with Robin, wondering whether he was going to be silly and take him out of the role. Robin was actually terrific to work with and would encourage him between takes, and would crack jokes only at the appropriate times. Bridges gets choked up when talking about this, probably thinking about how Robin had passed.

The Tale of the Red Knight – 2015 documentary with artists Keith Greco and Vincent Jefferds on making the knight.

They had to do create this being with real props and effects. There was no CGI or green screen back then.

They take out the props from the studio. They said, “do you want to work with Terry Gilliam”? They said yes without hesitation, and they had to get a helmet and other junk for him to look at as an audition of sorts. Terry said, “it’s all wrong, but you have the job.” They were always behind schedule because they were hired later. “It was like we were being chased by the Red Knight.”

They did the whole thing with a horse, a stunt guy with a lantern on his head, all painted red.

Jeff’s Tale: Images of the set from Jeff Bridges’ camera.

He takes these images on all of his films. He shows a number of production meetings, script meetings, and Mel Bourne often telling people there wasn’t enough money to do everything. He shows the various departments (sound, camera) on set and of course the actors. It is a fun supplement that gives a feel for what the production was like.

Stephen Bridgewater was a shock jock that stopped radio and became an actor and director.

Bridges is a good fit. They show him doing the show. He talks to some women, tells them to take their clothes off, get some Wesson Oil, and then drink it. He calls a lady that had sex with a US senator. He speaks with an offended lesbian. “Congratulations,” he says. He does a variety of versions of calls that happen in the film, such as the person whose husband finishes sentences, which was as effective in the outtakes as it was in the final film.

He said that New York City is a magical place, and it really seemed like it when shooting that film. Robin loved Gilliam: “He is the element that makes this work.” He credits everything to Gilliam and it is clear he is genuine. He also contrasted this project with Gilliam’s previous works by comparing it to a mural painter who is asked to paint a miniature.

We see the entire cast trying out costumes to the “How About You?” theme song. It is a fun, short novelty.