It is fitting that I am writing this post to celebrate Ingrid Bergman’s 100th birthday for the Wonderful World of Cinema’s Ingrid Bergman Blogathon. I haven’t counted the Ingrid Bergman films I’ve seen. Perhaps it is a dozen, perhaps two, but few portray her anywhere close to the strong, resilient female character as she is in Stromboli. There are many other co-stars, including two prominent male characters, but this is undoubtedly Ingrid’s film. Not only does she represent a strong woman, but she comes to representing all strong women and the battles they must fight in a male-dominated world. In this regard, I see Stromboli as a staunchly feminist statement, which is ironic given that it is the first collaboration between her and future husband, Roberto Rosselini.

Bergman plays Karen, who we initially meet in a prisoner camp. One of the first actions she takes is to marry an Italian in order to escape the camp. Was this a marriage borne of love? Quite the contrary. It was a marriage for self-preservation and survival. In the wedding scene, the sense of apprehension is clear. Even in the above image, we can see the husband looking stern, and the wife looking distracted by her thoughts, looking off to the side. She is not marrying out of love and is nervous of this new direction in her life, but it is something that has to be done in order for her to persevere.

Her husband, Antonio (Mario Vitale), comes from the island of Stromboli off the coast of Sicily. He promises her paradise in exchange for her hand in marriage. What she finds upon her arrival is anything but. She is subjected to a barren, empty life. She finds that many of those who live in island have left for America or elsewhere, but many have come back. When asked why she returned from America, Antonio’s mother answers, “this is my home.” Karen’s home is in Lithuania, far from the Sicilian shores. This place is unquestionably not her home, nor does she want it to be.

The many faces of Ingrid Bergman in STROMBOLI (Rosselini, 1950) pic.twitter.com/hYZZ9S5eYB

Much of the film consists of Karen walking around the island, exploring not only her surroundings, but also herself. Bergman, always a fantastic actress, does a tremendous job at emoting even when she is not speaking. Her face betrays her anguish and inner torment as she quickly finds herself in despair, practically alone in this island. The only instance that lifts her spirits is when she encounters another man, who is almost the opposite of her husband. She beams and smiles in his presence. It is not clear whether she has romantic intentions with this stranger, but this man is a far better match than her husband. Regardless of whether her intentions are pure, the locals indict and reject her, as does her husband.

Please be warned that after these two images that contrast Karen’t anguish and happiness, there are minor spoilers and I will discuss the ending. 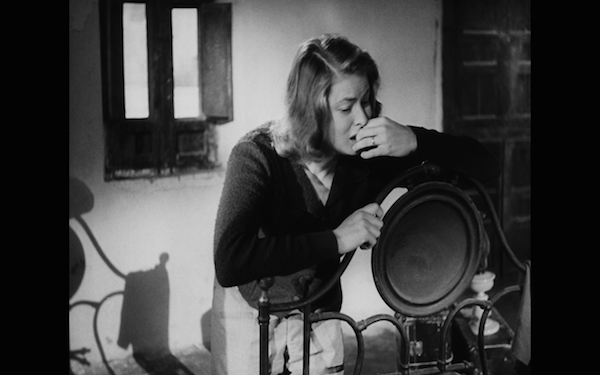 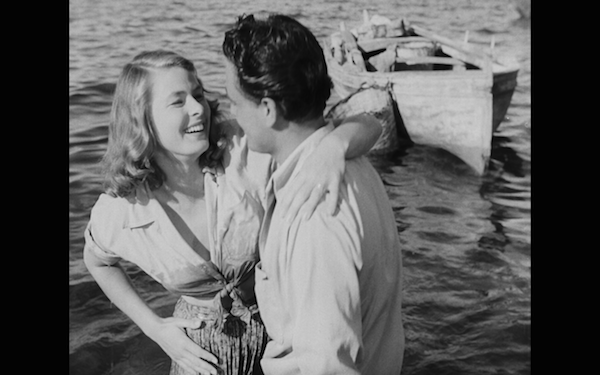 The violent nature of the island and its inhabitants is communicated through the way people interact with the elements. The locals see the local animals as their prey, and they treat them with cruelty. There is one difficult scene for animal lovers with a rabbit, which horrifies Karen. The men have to fish to live, and in fact, Antonio and Karen’s livelihood depends on his being successful with his fishing ventures. What follows, which Karen witnesses, is a violent slaughter of tuna. Both of these are among the most jarring scenes of the film, yet they are also the most effective. This violence also signifies a moment of final realization for Karen. If at first she was just wary and uncomfortable, she is now horrified. These are not her people in any respect.

The violent elements in STROMBOLI (Rosselini, 1950) — fish and volcanoes. pic.twitter.com/U5bOh006xi

The volcano is the most violent aspect of the island, and it also parallels the story and Karen’s journey. As she reaches the island and finds herself not fitting in, you could say that she is disturbed and rumbling. After she sees the slaughter of the fish and rabbit, the rumbling becomes an eruption of the volcano, but it is also Karen’t eruption. She does not act up, and she does not need to. The volcano scares the locals, who try to escape it by evacuating on boats.

Karen is not stirred by the volcano, but instead magnetically drawn to it. In a memorable final sequence, she decides to finally rid herself of this horrendous place by bravely climbing to the top of the volcano. It is in this sense that I see Stromboli as a feminist journey. She was oppressed by the world of man twice. The first time was in a actual prison while the second might as well have been a prison. Rather than succumb and subjugate herself to this tyranny, she frees herself by conquering an erupting volcano. This volcano that she defeats represents the world of man. The final sequence with Karen on top of the mountain is magnificence. It represents hope, salvation, not just for Karen, but for women in general.

This is a short two-minute introduction. He says it is about someone who survived the war and learned survival instincts, yet finds herself trapped.

This project was scandalous because Bergman was married and Rosselini had a mate (Anna Magnani). A love affair began and they were invaded by tabloids and journalists. It was also a scandal that he “stole” an American star to make an art film. The film stands apart from the gossip that surrounded it.

What’ I found interesting is that she didn’t care for the films she did with Rosselini, and only liked one of her collaborations (Joan of Arc at the Stake). We find out later from her memoirs that she was surprised when they were re-discovered.

Rosselini Under the Volcano: 1998 documentary.

These are the types of features that I adore. They revisit the island all these years later to see what is left. They show the volcano erupting. Back when the film was shot, the volcano erupted continuously, every seven minutes on the dot.

They interview the little boy that Bergman speaks to, of course now fully grown and having aged a bit. The two male leads meet. Mario talks about having to have the English words written for him phonetically because he did not speak a word.

A sad story from the production is that one person passed away during the production. A general helped lead them to the top of the mountain, but inhaled some poisonous gas along the way and had to be taken down to the base. He later died.