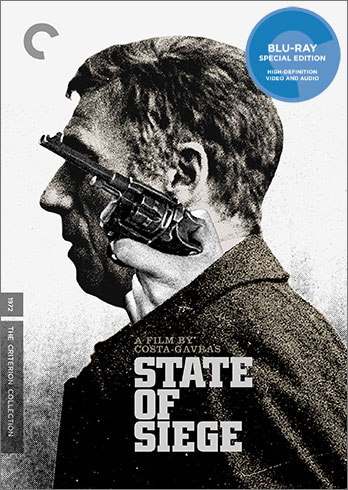 Would it be safe to call Costa-Gavras an advocate filmmaker? That’s a tough question, which I am not sure whether I or even he could answer. He was unquestionably a political filmmaker, and he dabbled in subjects that were often controversial. If he was not angering the communists from The Confession (my review), he was angering the CIA by taking unveiling the blemishes of the Cold War. He certainly had his political views, and those did take shape in his films. We learn from the supplements of this disc specifically where he found the motivation to make this film, and it was not based on a positive impression of Americans.

The subject of State of Siege is the activities of CIA-like organizations that were being undertaken in various South American territories. The plot is about an American, Philip Michael Santore (Yves Montand) who worked for USAID as a “Communications Expert.” I used quotes for his job title because we’re not sure exactly what he did during his various travels. Was he a benefactor or was he a terrorist? That answer is not provided, although it is strongly hinted that he was at least aware of the latter activities, if not a direct participant.

I am about to reveal a major plot point, but not to worry. It is not a spoiler, at least unless you consider the beginning of Sunset Blvd a spoiler. Our operative friend, Mr. Santore dies at the beginning of the film in Montevideo, Uruguay. The film begins with a shot of a shiny Cadillac followed by a series of roadblocks and an exhaustive search by the authorities. We do not know what they are searching for initially, but minutes later when they discover a carcass in a car, we know. Soon after the discovery, we see a highly ceremonial funeral, with an American flag draped over the casket. We get the impression that something is awry because the archbishop and academics are not present, yet the funeral is well attended, implying that this was the passing of an important, political person.

Is Mr. Santore a good person? That’s another tough question. He comes off sympathetically, some of which has to do with the ever-likeable performance by Yves Montand, who was also a popular political figure at the time. As the film flashes back to the kidnapping and interrogations, we wonder which is the truly righteous, Santore or his kidnappers? He is accused of, at the very least, knowing of torture, and at worst, guilty of perpetrating war crimes. Yet he is part of a system. If he was guilty, was he simply doing his job? That does not mean that he deserves to be kidnapped and killed. His captors also are sympathetic. We learn through Santore’s observations that they do not intend or want to kill him. They are merely fighting a battle with limited weapons. We are not spoon-fed who to like or root for. One could make an argument that the kidnappers and kidnapped are both right to some respect, and simply pawns in a chess game between people far more powerful. The real evil could be the state that infringes on the rights of the people, or those who choose to not compromise and therefore through inaction lead to the creation of a martyr.

What is clear is that Costa-Gavras was aware of the goings on in Latin America and elsewhere. With the benefit of hindsight, even the citizens of the USA can agree that this was a dark period of history and we do not condone the actions of the government. Even then, the average Joe was not aware of what operatives were doing overseas, either to protect American commercial interest, or as a product of Cold War rhetoric. Costa-Gavras is unquestionably critical of these puppeteers, but he is also critical of those who infringe on the liberties of others. By using some excellent location shots, he shows how the police force is both ruthless and inept. In some instance they are bumbling, such as in a humorous scene where the police chase after radios that are broadcasting propaganda, only to find the sound coming from a different radio. This is one of the few moments of levity, and it comes at the expense of the “Keystone” cops.

State of Siege is sparse on action and aside from these large location shots, often uses minimalist filmmaking methods. Like with The Confession, the real drama comes from the conflict between the revolutionaries and their captor. There is no suspense as to what the outcome of this encounter will be, but what keeps us enthralled is through the character examination, and whether he is being honest about his innocence or whether he is a liar. The flashbacks and the pinpoint questioning lets us know that the captors know plenty more than they let on, but are they right about Santore or is he yet another innocent casualty in the continual Cold War? We aren’t told, and this is yet another reason why Costa-Gavras was considered the master of the political thriller. He makes scathing political statements, but he creates complicated characters and blurs the lines between good and evil.

State of Siege is not a perfect film. I had some quibbles. One that jumped out at me is that they used similar airport greeting scenes as a way of showing how Santore traveled the world, but the only difference between many of these stops is the country name on the staircase that rolls up to the plane. It is obvious that the same location was used, probably over a short period of time, and they simple changed the angle and the sign. There are other minor issues, but there is more here to like than dislike. Even if it is not the perfect film, it seems to capture the spirit of CIA activities in Latin America and elsewhere from the perspective of the people who experienced it. This makes it an important film, even if not a great one.

The idea originated with an American advisor that CG was aware of in Greece. This was a tough guy, probably the stereotypical CIA spy. He was the real deal and was killed in his car later.

Based on Dan A. Mitrione, who was part of AID, which was a sister or daughter program to CIA. Mostly the story of the subject was the same, but the name was changed.

You can tell he is a true student of politics and governments as he cites various countries and how they came undone by their violent nature. He is referring more to Nazi Germany or Stalinist Russia, but he is perhaps making a gesture towards America’s checkered past and present.

This seven-minute montage of news footage shows the real story, but from the American perspective. The anchor talks about the kidnapping, the search, the ultimatum, and most of what we see in the film. Even though it is clearly biased towards Americans and wanting the citizen freed, it also states that the Tupamaros were seen as Robin Hoods that were not violent, but that impression was changing with this incident. Costa-Gavras seems to capture that as well, that they do not intend to be violent, but only resort to it out of necessity.

The supplements are slim and this fits better as a supplement to The Confession. Even though it isn’t the most stacked disc, it is well worth getting for the film and the transfer.