Secret Sunshine begins as an ordinary character piece, with a widowed mother planting roots in her husband’s hometown as a way to begin fresh. We can tell early on that the bonds between the mother and her son are tight. In the opening scene, when they have a car breakdown, she tells her son that “we’re stuck together.” Most of the early scenes are spent developing the mother character, Shin-ae, and how she is out of her element in the small city of Miryang. She does not fit in with the crowd, and finds that when she tells one person her backstory, the entire town knows her story. Her only friend is her son, and they could not be closer. 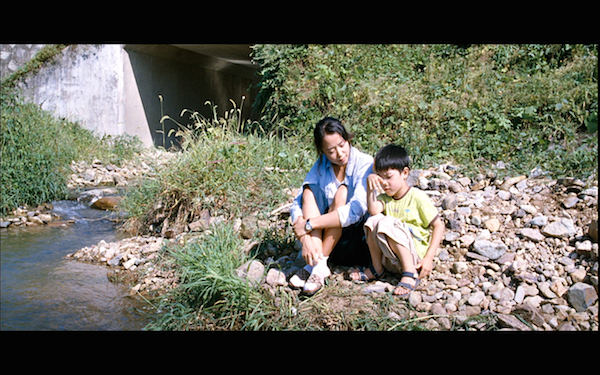 Towards the end of the third act, a crime takes place. It is a devastating crime, one that impacts all of the characters and forces the story to take a left turn. When the crime is revealed, it appears momentarily that the film is going to transform from a drama to a thriller or crime procedural. While some procedurals can be well done and have some artistry (Vengeance is Mine for example), I have to applaud the filmmakers for not writing the easier story. It resists falling into the formulaic trappings of the procedural drama. While it does give resolution to the crime, it does not dwell on who did what, how the investigation or trial were carried out, or anything else pertaining to the process. The closest we get is the main character visiting a crime scene. Secret Sunshine deserves credit for not succumbing to the lure of the thriller, and instead focusing on the characters.

Be warned that after this image, I’ll be delving into spoiler territory. Please do not read further unless you have seen the movie or could care less if I give it away.

The pivotal scene is the kidnapping of Shin-ae’s beloved son, Jun, and his subsequent death. As noted above, we do not dwell on finding the killer, but they do find him and put him away. If you pay attention, you can see who it is in the narrative, and there is an emotional payoff in one of the final scenes for those who paid attention to his daughter. All of the details about the crime are for the most part unnecessary aside from that it happened and devastated the mother.

Religion is a major theme, and it intermingles with the title, which also happens to be the Chinese translation of the city’s name. Miring means “secret sunshine.” Religion is introduced early in the film before the kidnapping. When Shin-ae picks up a prescription, the pharmacist gives her a religious pamphlet and encouraged to join the local service. This is where the gossip comes into play, as the pharmacist already knows that she is widowed and a single mother, and makes assumptions about her character from there. Shin-ae actually denies the assumptions and is insulted by them, but through the performance, we learn that the pharmacist was correct. Shin-ae is a traumatically wounded woman.

It is not just religion that is a core theme, but belief in general. The pharmacist tries to convince her to “see the light” on more than one occasion. At first, Shin-ae is a stringent atheist. She does not believe what she cannot see. During one of their discussions, the pharmacist notes that God is within the sun beam that is shining through the store window. Shin-ae walks through it defiantly, noting that there is nothing there. 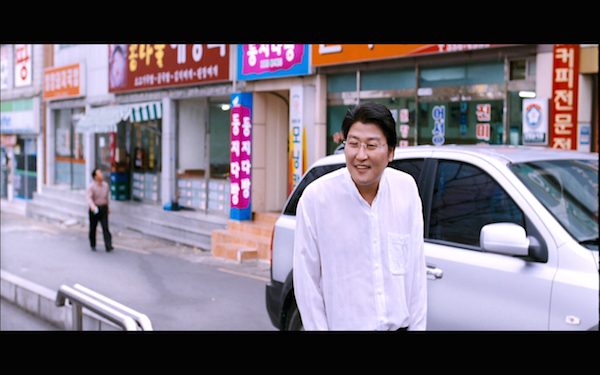 An aging, unmarried male named Jong Chan consoles Shin-ae after the tragedy. He meets her in one of the film’s early scenes when her car breaks down, and develops a longing for her. For much of the film, it appears his intentions may be admirable and platonic. When people ask of his sexual intent, he dismisses saying that “It’s nothing like that.” In truth he is simply bashful, yet he watches over Shin-ae as she grieves. You could call this being in the “friendzone,” but there is a chemistry between them – whether it is as friends or partners – she usually welcomes his presence, even if at times she tries to rid herself of him.

Shin-ae changes her mind about religion, or at least decides it is worth a try. Anything is worth trying if it might relieve her suffering. She goes to church and Jong Chan tags along with her. It is over a few scenes that she completes her conversion, but we are meant to infer that this takes place over a long period of time. The film moves through time quickly. Shin-ae finds exactly what she is looking for through religion, and finds what at first appears to be true happiness. She makes friends with the local community, even goes out to Karaoke bars with the girls, and has finally settled into Miryang living. Her transformation is remarkable, and the girls applaud her for getting her life in order after losing her husband and son.

At one point, she decides that she is strong enough to forgive Jun’s killer. She decides to visit him in prison, bring him flowers, and through the power of the Lord, offer forgiveness. Is she doing this for herself or for him? This isn’t clear, but we get an idea after they meet. Rather than living a miserable life in prison, she finds in her son’s killer a well-adjusted man, looking healthy and serene. When she reveals why she is there, he is pleased. He too has found solace in God. He has achieved forgiveness. Shin-ae is shaken. How can God forgive him when it was her that was bereaved? How can God be allowed to forgive someone without the injured party also forgiving? As quickly as Shin-ae became Christian, she just as quickly loses her faith.

If Shin-ae was apathetic towards religion before she lost Jun, she is aggressive toward it after being robbed of her forgiveness. At first she lashes out just because of the unresolved pain she is feeling, part of which she feels religion is to blame. In a particularly intense scene, she begins crying during prayer in a church service. That prayer turns to a guttural wail. She screams out as if she is physically hurting. Even though Jong Chan is still behind her, trying to console her, the fire cannot be put out. She turns further away from the church, finds an outdoor retreat and sabotages the audio equipment to a song with lyrics about how everything is a lie. This plays while the pastor is preaching about God’s plan, but his sermon is drowned out by Shin-ae’s song.

There are some logical problems with certain plot elements. Even though we are led to think that a lot of time has passed, it’s a stretch to believe that Shin-ae could be depressed, then so happy that she cannot contain her wide smile, to depressed again and wanting to leave her life behind. It’s also unlikely that someone would be brave enough to forgive someone who had committed such a heinous act as kidnapping and killing a son. I had trouble believing certain things, yet I was able to mostly get past them. That was thanks to the remarkable performance.

If the lead performance were poor, this film would not have made it out of South Korea, much less made it into the Criterion Collection. The performance is devastating. Do-yeon Jeon is believable in the highs and lows of her character. At times her emotions are so strong that it hardly seems like acting, and this is the case whether the character is feeling grief or elation, although the performance really stands out when she is hurting. The emotional low that Shin-ae falls cannot have been an easy place for the actress to reach, but for the most part, she knocks it out of the park. This is one of those films where the lead performance is so strong that it triumphs over what would otherwise be mediocre material.

Finally, this is not a pleasant film. It reminded me of a slightly less harsh version of Lars Von Trier’s Breaking the Waves. Like Bess, Shin-ae has her demons and deep down, has a virtuous side. Both are martyrs. The only difference is Bess’ sacrifice gets her closer to God, whereas Shin-ae could not be further when she decides to leave her life.

“What is the meaning of ordinary lives?”

This is not a story about an event, but about a place. He chose Miryang because it is an average small town. It was near his home town, but he was always fascinated by the name even at a young age. It is a poetic name. He used many locals for the cast, either theater actors or amateurs.

He did not intend for this to be a religious film, but it is a film about God. Jong Chan could be interpreted as a god-like character or perhaps sent from God to watch over her. He literally does watch over her in many scenes. He is an “earthy” person that could be good for Shin-ae, but she rejects him. The actor did a good job with the local dialect that foreigners will probably miss out on, but that contributes to his “earthiness” (I think he means “down to earth” with this phrase).

He did not direct the Do-yeon Jeon or her emotions much. He wanted her to draw on her experiences, which makes her performance that much more impressive given that it wasn’t directed. She had a tough time on the set because there were painful scenes day after day, so the actress had to suffer. She was at odds with the director, but they made up after the shoot was complete.

On the Set of “Secret Sunshine”:

This is a short, 6-minute film, which basically shows little outtakes from the set. For example it starts with the two leads laughing about wondering how the film will look when it comes out. They are both curious because the style it seems new. They show a montage of misery from Do-yeon Jeon.

“Love makes you a fool” becomes a song because they talk about what a hopeless character Jong Chan he is. She calls him a loveable character. He thinks he is a fool.