I’ve talked before about “regulated differences” before when discussing La Promesse (link) by the Dardennes. When looking at a film noir, the theory still holds weight, or if anything is more relevant. By 1947, noir was starting to be thought of as a genre (would more accurately be called a “cycle”) thanks to the French critics like André Bazin. 1946 had been a watershed year for noir with The Big Sleep and The Killers pushing the boundaries, but there were still a great deal of constants. The protagonists were almost always confident to the point of cockiness, and aside from angst, frustration and confusion, would rarely show emotion. Their characterizations were often stoic and rugged, with a heavy dose of masculinity. Even they often were fallible, naïve, and subject to being bamboozled by femme fatales, they still rarely showed softness or humanity.

We appreciate the two noir films I just mentioned because they are inventive with plot structure and narrative, but they still hold true to the conventions. Ride the Pink Horse begins by staying within these conventions, yet at some point things start to crack. The façade fades, and we see weakness. The protagonist ends up losing control, becoming a shell of himself. He is so weak and incoherent that he is helpless to resolve his plotline, much less even comprehend how far he has fallen. That is Robert Mongtomery’s take on noir. While it does not measure up to the best of the genre, it is worthy of respect and admiration for showing a different and unique facet. This weakness and humanity is one of several regulated differences within the film, but it is the cornerstone of the structure. It is existential in this regard. Some things are just out of our control, yet we try to persist.

Robert Montgomery acts and directs, and through both he brings a distinct sense of style. He uses lengthy takes, gives the scene some breathing room for events to unravel. As an actor, he begins with the custom, stoic characterization found in noir films. He is emotionally and personally impenetrable, working only towards the goal of avenging his lost friend Shorty. He believes Shorty was taken down by the suave and charismatic war profiteer, Frank Hugo, who is in a class amongst himself and lords over the poor town of San Pablo, Mexico.

When Gagin arrives in San Pablo off of the bus, he is stern and forthright. He walks into the train station and walks out, sizing the place up without an expression on his face. He means business. Later he encounters two women that welcome him with a certain wanting. They are more attracted to the fact that he is a well-dressed American, but he picks up on their ruse and rejects them. Instead a younger, shy Indian girl catches his attention. He asks for her to direct him around town not because of any attraction, but because she is non-threatening. 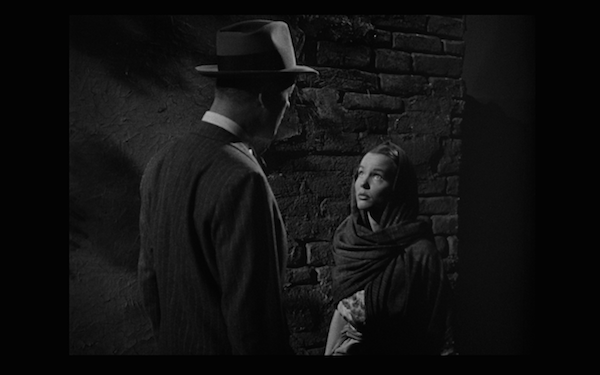 Later he befriends a local Mexican, Pancho, who becomes his caretaker and friend. Pancho calls Gagin “The Man With No Place,” and opens up his house to the stranger. They become fast friends, and creaks start to show in Gagin’s impenetrable resolve. 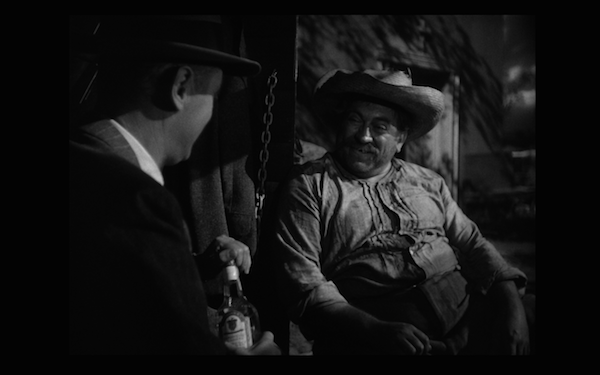 Gagin and the exuberant Pancho.

“The Man With No Place,” is an appropriate label for a lot of noir lead characters. Many noir films feature private detectives as the protagonists, but deep exposition is not usually necessary. They are almost always hard-boiled, and revealing why would shatter the mystique. The assumption is they have become so tough because they’ve seen so much trouble that they are now jaded towards the world. We learn very little of their origins or backstory. Can you imagine Sam Spade talking about daddy issues when he was growing up? It just doesn’t happen. We learn about the characters and their motivation as they interact with other characters.

That’s why I love the label of “The Man With No Place” for Gagin. We know next to nothing about where he came from. We know he arrived in a bus and that his motivation is revenge for the loss of his friend, Shorty, but that is it. As a character, he has no place. If he makes it through this mess, we have no idea where he’ll return to or whether things will improve. We do learn about his feelings toward the world based on his interactions. For Gagin, we learn that he favors the lower classes and even a government investigator over the upper classes. Based on his dress, this is an unusual mindset since he has an upper class appearance. That is why the girls took notice of him early on. We do not know why or how he became to despise the rich. A good bet would be whatever happened to Shorty, but since he is “The Man With No Place,” this does not need to be explained.

Frank Hugo and Pancho have a couple things in common. First of all, they are both charismatic and personable. Even though Hugo is not trustworthy, he does lure you in and at times is a likeable character. Pancho is a delight, and Thomas Gomez was rightfully nominated for an Oscar for the portrayal. He is as benevolent as they come, and just lives to enjoy life. The key difference between him and Hugo are not just the class they occupy, but their feelings towards money and consumerism. Hugo cannot get enough money and power, whereas Pancho has little care for money or material things. Gagin identifies and appreciates Pancho’s values, but he is squarely in the middle. While his resentment of the upper class machine is palpable, money is part of his motivation, probably as a means of self preservation. In one scene he even tries to cut Pancho in for $5,000, which he sees as a gesture of friendship, but turns out to be one of ignorance. Pancho could care less about $5,000.

Marjorie is the femme fatale.

Another way this diverges from the traditional noir is in how it handles the femme fatale. In many noir films, the femme fatale has a bit of irresistibility and the hero cannot help but fall for her charms. This time, Marjorie Lundeen fills that role and appeals to Gagin, trying to lure him with both her looks and the potential for money. Her motivation is the same as most noir females. She is not on Gagin’s side and will double cross him anyway. He rejects her categorically. A significant scene where this is demonstrated is when he takes Pila to dinner. At first she seems out of place, even remarking on how unusual it is to eat a fruit cocktail. Marjorie approaches during the meal and asks Pila to step aside so the grown ups can talk. Pila, obedient as ever, obliges. Gagin hears out Marjorie’s offer, but inevitably sends her away for the lower class and more demure Pila.

Things do not go as they planned, and violence ensues. One location that I have not mentioned, yet is important to the plot, is the titular Pink Horse. This horse is part of a carousel, which is where the lower classes and especially children take pleasure. Pancho identifies more with this group, and young Pila belongs to both of them. This carousel is also important because it is where Gagin first shows humanity, where he cracks a smile while watching a girl ride.

There is a fantastic scene where a violent action is taking place in front of the children in the carousel. We see very little of the violence, but instead see the anguished reaction on the children’s faces, and this includes Pila. This object of base pleasure becomes desecrated with violence by the powerful, which is just another example of how unfair and unequal life is in this small Mexican town.

Montgomery gives a fantastic performance, especially in this scene of Gagin’s weakness.

I will spare details from the ending of the plot because it is quite an experience to watch on your own. I will say again that things work out differently than most noirs. The lead character becomes impotent in his fight, and must rely on the help of his friends. By this point his character has transformed from the hard-boiled and stereotypical noir hero to a needful victim.

Tonally and thematically, the film is all over the place. At times it is pure noir, with dark shadows and shady characters. At others it is rosy and uplifting where the sun is shining brightly. The lengthy opening scene has both attributes. The sun is shining, but Gagin has his own personal shadows. Over time, his personality changes and the landscape varies from the confrontational Hugo apartment to a festival. These tonal changes are a welcome change from the noir template, as they develop not only the characters, but they give the film an identity that separates it from dozens of other noir pictures.

Commentary with Alain Silver and James Ursini: These are Film Noir historians.

Robert Montgomery was instrumental in breaking the barriers between actors and directors. He was one of the first who had gone from acting to directing and achieved success.

He had a unique style. For instance he uses long takes, notably with the intro shot, which give an added level of suspense and more of a sense of place. Montgomery learned a lot of technical tools from John Ford, who was his mentor. With this film he was parodying noir stereotypes. He does not cut unless he has to. There are not many point of view or reaction shots unless they are absolutely necessary to say something.

Pila is surrounded by some mysticism, most of which comes from Native American stereotypes. She sees him dead and makes a comment about him being knifed. She also is a major factor in getting Gagin to change. One of the commentators says this is a “movie is about reformation, redemption in many respects.”

The restaurant scene is important for many reasons. For one, there are elements of romantic comedy between Gagin and Pila, and then it is interrupted by Marjorie and it switches back to noir. Gagin’s reaction to her, as well as all the other people ijn the restaurant that give him looks, is a reference to his hatred of the snobbishness amid the upper crust of society.

Noir is not a genre. It is about mood and themes, interiority, psychology and motivations. There are many classic noirs set outside of the city, which is Smith’s study topic. Detour is one example of many in America, while Touch of Evil is an example of Mexico.

Mexico is important for noir because it is a place people escape to. It is used often and is portrayed as transient, lawless. Unlike other Mexican noirs, Ride the Pink Horse pays a lot more attention to local people and their culture rather than just on other Americans.

Dorothy B Hughes, the author of the book that Montgomery adapted, was interested in characters, environments, class, and how these influence development. We see a fiesta in the movie, but the novel has a lot more detail about fiestas and Mexican rituals.

Smith calls it an anti-noir. She concludes that is opposed to most noirs. It can still be categorized as a noir, but is more optimistic.

Radio Adaptation – More of a novelty. I’ve said this before, but this is the type of thing that I wish they would let you take with you. I listened to the first 20 minutes or so, and found it enjoyable as they recreate the action of the movie, but of course it pales in comparison.