← The End of the Studio System, Part 3
My Journey to British Blu-Ray →

“Honor Thy Father and Thy Mother.”

Aging is a not a sexy topic for Hollywood. Coming of age stories are different. Dealing with the adversity of adulthood is different. There are plenty of those movies, although not nearly as many that are simply about living life as an elderly person. The few that I can think of are exceptional, but few match up to Leo McCarey’s Make Way for Tomorrow. 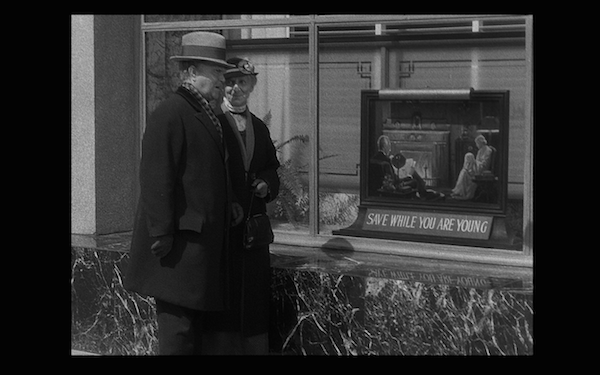 Save When You Are Young

The film was very much a part of its time, as the depression was not forgiving for people who aged without preparing for their future. This point is brought up numerous times in the film, such as in the above image. The Coopers suffer because they did not prepre for their future, and furthermore, pride prevents them from asking their children for help until it is too late. Does the fact that they made such vital mistakes regarding their livelihood make them bad people? That’s what this film explores. 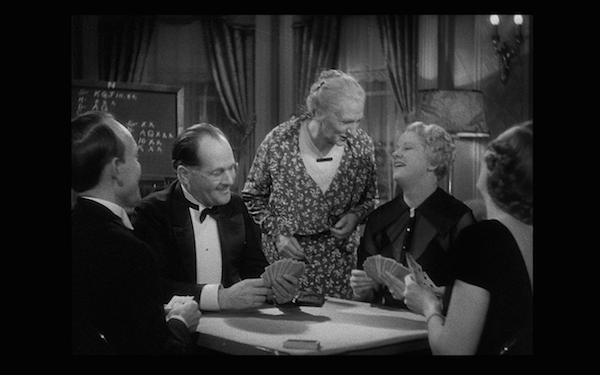 To the children, they at first seem like a burden, and the film initially looks at the older couple from the younger perspective. Some of the early comedy comes from the “fish out of water” scenarios with the older couple trying to acclimate to a younger way of life and not exactly getting it. One such example is when a daughter-in-law is teaching the Bridge card game to a class and Mrs. Cooper spectates. She makes comments on people’s hands and slowly meanders around the room, not quite understanding, enjoying the social atmosphere yet being somewhat disruptive. She awkwardly jokes that “with a teacher here in the family, I would never be able to play Hearts.” The crowd nervously laughs in response and the daughter tries to get rid of her.

The tone changes when Mrs. Cooper takes a phone call from her husband. She is hard of hearing, so she speaks loudly enough so that the entire room can hear. They stop playing cards to listen. “Hello, is that you Bark?” she yells loudly. The conversation is both comical and endearing. She talks about the “friends” that are playing cards. As they get further into the conversation, you can tell that “Bark” Cooper is expressing how he missed her. “Oh, well three months isn’t so long,” she says. The entire room looks at Mrs. C, with her back turned to the card players. They react in part with pitying glances, in part with affection. It is the first of many moving scenes.

The children are not portrayed in the most positive light. They clearly love their parents, but they are constantly trying to get rid of them. Whether they are trying to shoo them off to the movies with their granddaughter, sneering at their Jewish companions, or looking for old folks homes, they are not altogether sympathetic. Even though the children are the recipients of the audience’s scorn, the parents are either forgiving or ignorant as to the machinations against them. In yet another moving scene, when a son has just signed the paperwork to put his mother away in a home, she solemnly tells him that he was always her favorite. He gives an emotional hug in response, in part because he knows that she still loves him and feels guilt for what he has just done.

The performances of the older folks are pitch perfect. It is worth mentioning that Victor Moore and Beulah Bondi are about 20 years younger than the characters they are playing, but you would not have noticed. Moore as Bark has some of the better material, and he nails it with his slow-drawl, curmudgeonly performance. One of the funniest scenes is that with the young doctor making house calls. His lines about calling the doctor’s dad and not saying the number 99 are among the best. He is a crabby old man, but we’ve all known this type of person and the surliness is part of their charm. We love them because they are uncompromisingly who they are.

The latter third of the film is where it really hits home. This is the type of film that I have a tough time articulating about it’s greatness. It is shot in the classic Hollywood style without being too showy, yet the performances, writing and direction come together to make something truly special. Some people use the term “movie magic” to describe such a film. That’s not a phrase I’m fond of because of the lack of specificity, but I think it is appropriate here. There were a handful of films that on paper should not have been as great as they actually are.

The last third of the film is where the “movie magic” is truly cemented. My favorite scenes are when the old couple finally get together and spend a few quiet moments alone. It is one of the few films that, through a few lines of dialogue between characters, can put a smile on your face. McCarey stops short of sentimentality and manipulation. Instead the characters come from a position of honesty and awareness of their situation, that circumstances beyond their control have been keeping them apart. They take solace and refuge in each other’s company, and are not concerned what is happening to the world around them.

I will not spoil the movie and talk about the ending, but I will say that the way it ends does not conform to the Classic Hollywood formula. That is another reason that it is elevated in my opinion. From the very beginning, however farcical the film can be at times, it is rooted in realism and character. Whether we like it or not, that’s how it should end as well.

Bogdanavich had dinner with Orson Welles who said “it was the saddest film ever made. It would make a stone cry.” It was one of Welles’ favorites and influenced his own films.

Mockery was considered an “actor’s director.” He got them to loosen up and gave them space to work. Cary Grant is an example of using this space to improve the picture, as he improved some films, like The Awful Truth with improvisation from that freedom. Mockery directed light films, and Make Way For Tomorrow was his darkest movie because of the way the children were portrayed.

The 1930s films for McCarey were the strongest, but his later films did not hold up as well. He was anti-communist, spoke at the HUAC trials, and that did not help him in the industry.

1937 was a tough time for McCarey. He had gotten sick on his last film and his dad had recently passed away. Social security had not started, but it was in the works and was a major topic in the news media at the time. Surprisingly there were not many message films about the subject. Make Way For Tomorrow is the only real film from the time in favor of social security, which is surprising coming from McCarey because he was conservative.

McCarey refused to give a happy ending. The studio was nervous and thought it would bomb, but the opposite happened. People loved it. It ultimately lost money and it got him fired, but his reputation was escalated.

Giddens discussed how McCarey was fair to minorities. The maid in the scene is nuanced and gets a good moment in one scene. Max is a Jew and experiences some anti-semitism from Cooper’s daughter, but is portrayed as a benevolent and friendly character. McCarey had a history and a future of being a filmmaker that honored minorities, most notably in Going My Way.

Such a delightful classic film deserved a few more supplements. This is a film that is absolutely a must watch for anyone interested in classic film, but the Criterion Blu-Ray release does not do it justice.

← The End of the Studio System, Part 3
My Journey to British Blu-Ray →