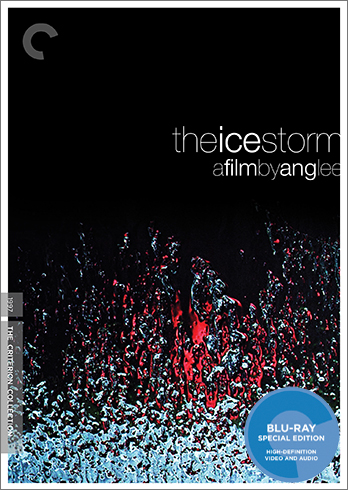 Some films are so thematically rich that it’s nearly impossible finding an angle. There are just too many options. The Ice Storm is one such film. I could look at it from the period, the unruliness and political instability of 1973. It could be seen as a grim portrait of despicable and irresponsible people. Instead, I chose to approach this as a contrast between the sexual behaviors and confusion of children versus their parents.

With such a large ensemble cast, a great many character parallels can be drawn between the familial bonds. There are two primary families of characters, the Hoods and the Carvers, with no real single protagonist. A good argument could be made for many of the characters as the primary protagonist. Ben Hood (Kevin Kline) gets a lot of screen time and his actions initiate much of the plot. The narrator is his son Paul (Tobey Maguire), although he plays a comparatively small role. Elena Hood (Joan Allen) is also a central figure, as is their daughter, Wendy (Christina Ricci). The Carvers are important but secondary characters. Janey (Sigourney Weaver) is in some respects an antagonist, yet she has a few sympathetic moments – primarily with parenting. Her husband Jim (Jamey Sheridan) is a passive character, as is his son Mikey (Elijah Wood), but not the other son, Sandy (Adam Hann-Byrd).

Ben is a terrible parent, terrible husband, terrible adulterer, and completely unaware of all of this. He is living in another world. The fact that he’s having an affair with the icy Janey is surprising. He doesn’t seem like the type of paramour that she would settle with, and the attraction is waning. “Ben, you’re boring me. I have a husband. I don’t particularly feel the need for another,” she tells him after he goes on about his problems. He is more hurt by her rejection than by his wife’s suffering as a result of the affair. His lack of awareness extends to his terrible excuses, which his wife rightly sees directly through.

In another instance, he catches his daughter in a promiscuous act with Mikey Carver, and he gives another silly diatribe towards them. Again, it is awkward. He is terrible at it, not understanding the situation and accusing Mikey of going further than they were. What made it more ridiculous was that his daughter, Wendy, was wearing a Richard Nixon mask. The conflict ends with her being rebellious, saying “and forget all the stern dad stuff.” This is not the first time she has lashed out at him. At one point she calls him a fascist, and while he challenges her on it, she seems to understand the world better than he does. She is curious about life, but more comfortable and deliberate, and immeasurably more expressive and compassionate.

The many faces of Joan Allen from THE ICE STORM (Lee, 1997). pic.twitter.com/uErhd3BckN

Elena Hood (Jane Allen) is one of the more fascinating characters. Knowing that her husband is cheating on her, she takes refuge in trying to live vicariously through her young daughter. She fondly remembers the feeling of being free, which is probably an idealized and unrealistic memory. She sees her daughter riding her bike down the road, merely using it as a means of transportation to one of her romantic trysts. Elena sees the act of riding the bike and letting the wind blow in her hair as liberating, yet she is not sexualized like her daughter and you wonder whether she ever was. She rejects the advances of a progressive, freethinking pastor, who uses religion as a way of “breaking the ice” with a frustrated, married woman. It is not until the real ice storm begins where the sexual tension reaches a breaking point for all of the characters.

This was my second viewing of The Ice Storm, and before the first, I had never heard of a Key Party before. It is where everyone drops their keys in a container, and later the ladies draw them one by one. Whichever man’s key is chosen goes home with the lucky (?) lady. It is a foolish game, so silly that the youngsters would not even consider it. With a number of married or dating couples, one of whom has a boyfriend young enough to be her son, there is going to be unpleasantness and jealousy. Adult or child, it is a terrible idea. The outcome of the key party is a spoiler, so I won’t share it, but it is yet another example of how conflicted the adults are sexually.

The children are curious and spend a lot of time exploring the opposite sex. Wendy is romantically assertive, while all of the other characters are passive. Paul shares some of his father’s bone-headedness, as he pursues Libbets Casey (Katie Holmes) who is not only out of his league, but shares more in common with Janey than anyone else in the film. She begins the film with an icy reaction to Paul’s advances, and is ambivalent to him at their little private party even though he does not fit in. Like with another romantic tryst, alcohol is the catalyst, but Paul’s connection with Libbets is just as pathetic as any of his father’s activities.

Mikey is as lost as his father, Jim. Again, I won’t spoil the film, but things happen to them due to their being detached from the world, and in the finale, they express that detachment is specific and different ways. Jim is basically a non-entity, while Mikey is more interested in molecules than with catching a football.

As I alluded to at the beginning of this essay, The Ice Storm is deep, as it is convoluted. It is also extremely well put together, has some terrific performances. Joan Allen and Christina Ricci really shine. It also has some phenomenal shots and motifs. The ice is the most impressive, both as a plot device, a character descriptor, and as an example of gorgeous set design. After seeing the film twice, I’ve found that there’s a lot more depth than merely frozen water.

They introduce the film as the lowest market research tested film he’s ever done. That makes sense to me since it was marketed as a mainstream indie, but is dark and intricate. I would not expect it to test well at malls.

Lee says “F You” to Schamus in opening credits, and we can tell that they have a jovial and tight relationship. Schamus knows what questions Lee gets asked and which ones annoy him.

Schamus says that this is not a faithful adaptation of 1973, but it is an adaptation of what people remember about 1973. Everyone worked together to “craft this memory landscape.”

The book was structurally difficult to adapt. They had to “open it up” as Schamus said, which they did by showing all the characters at the beginning and ending. Lee calls it a “circular structure.”

There were a number of interviews with the cast, some of which were better than others. There were many statements of “it was an honor working with … “ someone, which are common in these type of featurettes.

There is plenty of discussion of the “adults” versus the “kids” and how they interacted. Older actors watched out for them and used them for inspiration, while the younger actors were intimidated at first and then warmed to them.

One of the most interesting parts of this documentary was with the kids talking about sexual encounters, which was weird for them. One of the best quotes comes from Elijah, talking about how he was coming to terms with sexuality personally, so he has to come to terms with it in the film too.

They are all proud of the film, even if it didn’t do well.

He talks about the feeling of handing off his work over to someone else. It feels like giving some part of himself away. His book was first person, whereas the film was third person, yet there are examples of first person narration in film, primarily through Tobey Maguire (although having not read the novel, I am not sure whether that character is the narrator).

The town was actually the town that he grew up in, and the town wanted to impede the shoot because of the subject material. That was strange for him.

Lee and Schamus: 2007 Conversation at Museum of the Moving Image.

I tend to enjoy these podium conversations, because they are usually not artificial. Often they are asked good questions.

This was filmed after Lust, Caution, which is probably safe to say will not come to Criterion. They talk about his career trajectory, being repressed in his homeland and getting an opportunity when he came in touch with Schamus. Lee gave a bad pitch, but he described a movie he had already made in his mind, and that vision impressed Schamus. The relationship has worked well for both of them.

Lee calls The Ice Storm the most artistic film he had done. I wonder if he would say the same thing now that Life of Pi exists. My personal observation when perusing his career is that he does a phenomenal job of adapting others, including this film and with Pi.

The Look of the Ice Storm: Interviews with three of the key visual artists behind the film.

They found photorealist painters from early 1970s and used them to develop style and natural light. This was filmed intentionally late in the season, so little warmth outside, but there was warmth inside. They made a strict distinction between Janey’s and Klein’s house – warm versus cold.

It was the first story he worked on that he didn’t have to research. He lived it. His dad was an architect, so he knew the styles. He was not prepared for the ice. It turned out that was a challenge. It had not been done before. He used unusual tooks like hair gel, which was effective, as it looked frozen. The biggest challenge was the large frames. Glue was used a lot for the wide ice-work.

She lived in the period and still had to research. She looked through vintage stores, found 70s fabric, and did a lot of crocheting. The Kline family were in lighter tones, whereas Sigourney in murkier tones. That impacted the character differences. She said that Kline was “naughty” with costumes because it was not comfortably fitting like modern clothes. He did knee bends to loosen them up and they had to repair them.

Often I find deleted scenes superfluous, and I would say that is true for the majority of the ones here. The one I wish would have made the final cut is the Reverend moving forward in trying to pick up Joan Allen’s character. I think it would have added dimension to her struggle. The other scenes were interesting, yet not essential.