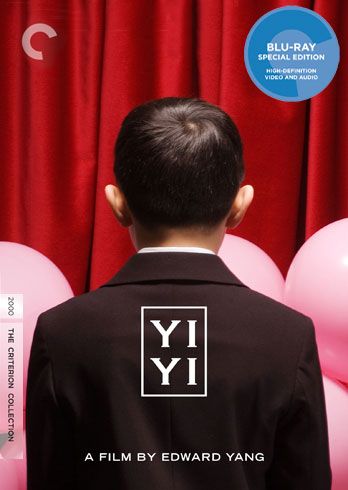 This was originally posted at Wonders in the Dark as part of their Adolescence and Childhood Countdown.

The term “family epic” is not often used to describe a film, not even an art film (at least not post-Ozu). There are plenty of lengthy films about families, but few that are grandiose to share a descriptor with the likes of Lawrence of Arabia. Yi Yi is indeed a family epic film. This is not just because it has a three-hour running time, but rather because it successfully captures the scale of a multi-generation family. Instead of telling a lengthy narrative through the generations, it reveals enough about the characters in the present, by exploring them through a single, binding experience, that it is just as effective.

I chose Yi Yi as my top film for the Wonders of the Dark Childhood and Adolescence poll. This choice may seem peculiar because the film features so many characters from the family, most of whom are adults, that the children are not given the most screen time. In fact, if you were to pick a protagonist, it would probably be NJ, the father figure. However, the children’s experiences mirror and elucidate the actions of the adults, and they flesh out the characters. The children, through their innocence and naivety, also interpreted the events with a perspective that the adults are incapable of, and sometimes their silly inquiries are prescient.

Yang-Yang asks his father, “Daddy, can we only know half the truth? I can only see what’s in front and not what’s behind.” This may seem like a simple, naive question, but it speaks to how humans tend to only look forwards and not backwards. The adults in the film are reticent to look backward, yet the children experience things that the adults have also experienced. In other words that Yang-Yang might understand, if the adults could see what is in front of the children, they might see what is behind their own view.

NJ is completely blind to the fact that his daughter, Ting-Ting, is struggling through her own relationship problems, trying to win the affections of someone she has a crush on. The outcome of that relationship (which I will not spoil in this review) is similar to what happened with NJ and a girl that he dated when he was much younger. We see through Ting-Ting what NJ’s childhood girlfriend felt, and when she enters his life again later, NJ is again blinded by the past.

Yang-Yang takes his idea of being half blind further. He takes photographs of the back of people’s heads, thinking that he is helping them by showing them the whole truth. When he encounters one lady that he can tell is sad, he stares at her. When questioned, he says, “I wanted to know why she’s unhappy. I couldn’t see from behind.” To the viewer, Yang-Yang’s curiosity is a part of his cuteness. He is an adorable little boy, and this is one of those funny fixations that children can get. It is humorous to see what length children will go to understand the world they are growing into.

While it is easy for Yang-Yang to be curious, it is difficult for the adults to look back and come to terms with mistakes they have made, much less try to rectify them. One character takes a journey to try to make up for his actions decades ago, the same issues that his daughter is experiencing at that very moment, but this is an exercise in futility. This is yet another example of how he can only see half the truth, and if he goes trying to find the real truth, it is not something he can change or undo. It truly is behind him. The only thing he can change is what he can see.

Edward Yang was quite the filmmaker, and he made a deep and beautiful film. There are many other characters, motifs, and elements that I could explore – such as the nature of business, luck, integrity – but at the heart of it all is family. Yang takes these experiences, personality quirks, and cuts them together so that we can see the correlations. While there are similarities within the families, everyone is different and must make their own decisions. The question is whether they will learn from or regret those decisions.

Yang does a good job at taking his time and pausing when needed. Some of my favorite scenes are when no action takes place, but instead there is quiet contemplation, usually with some music and gorgeous scenery. While there are some somber moments, he also shows the good times. Life is full of highs and lows, and we meet people we are compatible with, whether in a romantic relationship or business friendships, but things do not always turn out the way we want.

Yi Yi, simply put, is about the cycle of life. We are curious when young, but will make mistakes as we get older. Hopefully we will learn to live with these mistakes, have some good times along the way, and achieve a sense of peace. Yi Yi is life.

Wu, who plays NJ, was a screenwriter that worked with Yang and had not acted, but Yang recognized his talent as an actor. He is a very celebrated and busy writer.

They used the coma was a device to get into each character, but it is scientifically proven that speaking to someone in a coma does achieve some results although the grandmother had one of the deepest and most dangerous comas.

There were a lot of informational tidbits about modern society. For example, they used a subway system news item to date the film; trains were used for nostalgic reasons; the government was well known to be involved with criminals and it was intentional to come out in the film, and the American presence is very obvious in Taiwan. I didn’t write down as many tidbits while watching because it is long, and because I got carried away in the film and the commentary. It was an enjoyable conversation with Rayns asking Yang questions about the film.

Tony Rayns: He talks about the history of Taiwanese film. Started in 1950s because it had been Japanese colony. The nationalist government settled there and used film as propaganda tool. It was used by Chinese to inject their cultural identity.

Even though there were young filmmakers, there was nothing like a New Wave in Taiwan. Hou Hsiao-hsien and Edward Yang collaborated with Taipai Story, and the pair generally led the film movement. Much of their work was intentionally higher quality in opposition of some of the poorly constructed older genre films.

Yang is more intellectual and has complicated plots. His many characters add up to a broader picture. Surprisingly, Yi Yi has not been screened in Taiwan. Most of these minds split up for whatever reason and film business in Taiwan is “effectively dead.” They cannot compete with American films.