What separates All That Jazz from most musicals, is the level of honesty and authenticity. The musical numbers are all ways of expressing reality in an entertaining and artistic fashion, whether they are about the process and mechanics of putting together a Broadway music, or about one’s own mortality. Fosse’s mostly-autobiographical tale brings us into his world, the theatrical and directorial world, and uses that as a means to another world. More on that latter world in a moment.

The theater world is the one that Fosse knows the best, and he portrays it as a true insider. It begins with the cattle call, an arduous and brutal ordeal. The sequence goes on for a long time, nearly in a documentary style with clever editing to show the magnitude of performances that take place. George Benson’s version of “On Broadway” plays, reminding us what the stakes are. One of the dancers says he’s willing to change his given name (Autumn) if he gets the job. A job in a Gideon (or Fosse) production could make a career.

There are other theater sequences that are particularly effective. This was my third viewing, and one that struck me this time was the audition sequence with Victoria, who Joe had recently taken as a lover. Some may think that entitles her to special treatment, yet she gets none. She lacks in the talent department, so Joe pushes and pushes her away from mediocrity. You can see the pain on her face with every new attempt, and you sympathize when she thinks about quitting. This probably happens all the time in the theater world. She doesn’t quit and after a number of repetitions and being drenched in sweat, she gets the nod of modest acknowledgement. Gideon says that a take is better, and a sense of relief passes through her exhausted face. It was a nice character moment, performed well by the actress.

The other music pieces are part of Joe’s world. The adult-themed airplane number is performed as a dress rehearsal for the producers, but it takes a life of its own. It shows the director’s brilliance, but also his bravado. He’s not afraid to push the envelope, and the number is a reflection of how he lives – sex, drugs, and smoking. Another musical number is performed by his girlfriend and daughter, and is a great way of developing the character relationships in an entertaining and touching manner.

The other dance numbers were also part of Joe’s world, but not the same world. This world is just as open and honest, maybe more so, and they again show how Joe/Bob will go to depths that most filmmakers won’t.

Be warned, the remainder of this summary is going to be full of spoilers. This movie cannot really be discussed without referencing the ending.

Even though the dance numbers are entertaining and even fun, they are a contrast with the harsh reality of what Joe is facing. This is shown in graphic detail during the heart surgery, where they show the medical procedure happen – something I had never seen prior to this movie, and never expected to see.

That takes the movie to a different level. While in the hospital, Joe has a musical hallucination, which talks about how much he has done wrong, how he has failed. His decisions have led him to this point, with a fractured marriage, a stressful career, and literally, a breaking heart. 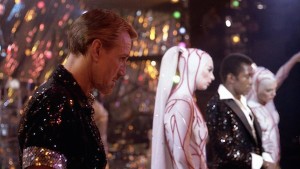 The final scene is pure brilliance. It is Joe saying goodbye to the world, including his professional peers, his family, even his enemies. The lyrics “Bye bye life. Bye bye bappiness. “ are dark, morbid, yet they are celebrational. “I think I’m going to die. Bye bye my life, goodbye.” Even though the movie clearly is leading up to the finality of Joe’s life, the harsh, abrupt ending is still shocking. It is still bold. It is still amazing. Even though the prior ten minutes were full of smiles and festivity, the stark reality is that you will be zipped up into a body bag.

Phenomenal movie. I’ve long called it my favorite musical ever, and that was cemented with yet another viewing.

There are a ton of supplements, so I’ll give an abbreviated survey here.

Commentaries: There is one full commentary with Alan Heim, the editor, and Roy Scheider, the lead actor. Even with the shorter duration, Scheider’s is the more interesting, as is to be expected. Heim’s is good too, but there is already a featurette about the editing on the disc that is more effective. One thing that’s surprising from both commentaries is about Fosse’s take on the autobiographical details. It seems that he minimized the fact that it was based on his own experiences, yet they were undeniably him. Heim points out that the address on the medications was Fosse’s address, and he would refer to the lead character as “you” when addressing Fosse, which the director didn’t like.

Ann Reinking and Erzsebet Foldi: The actresses that played the girlfriend and daughter have a good rapport as they reminisce about their experience. The young actress had no idea of the scale of the movie when she was doing it, and it was something hearing her talk about seeing people lined up around the block.

TV Appearances: There are three of these; one with Fosse and Agnes de Mille, and the other two with Fosse solo. It’s weird seeing Gene Shalit doing an interview. I’m not a fan, but Fosse makes for an interesting subject.

Featurettes: There are several. My favorite was on the editing, which sort of negated Heim’s commentary. There were others about the music, on-set footage, and even one on the making of George Benson’s “On Broadway.”

Documentary: This is short by Criterion standards, but long considering everything else on the disc. It is roughly thirty minutes and has several interviews with people involved with the production, including Sandahl Bergman, who was flown in just three days before her scene and had to learn a complicated dance routine.

Between the quality of the movie, restoration, and the extensive features, this is so far the best Criterion release of the year.