This next trio of Les Blank documentaries fit together well. They are all about Cajun culture, with the first two about the rural and backwoods Creole population, with the boxset’s namesake documentary, Always for Pleasure, a narrative of the types of celebration that can only take place in New Orleans.

Dry Wood features the Zydeco music of Clifton Chenier, although he is directly profiled in the sister film, Hot Pepper. Like with the prior documentaries, this is a meditative illustration of a mostly ignored yet fascinating culture.

Set in Mamou, Louisiana, Mardi Gras 1972, Dry Wood begins with a group of people in various, outlandish costumes, singing along to Zydeco music in Creole language. It is fitting for this trio of films, as they begin and end with celebration, albeit the latter is on a far grander scale.

In this picture, Les Blank does what he does best. He captures the character moments. The day after Mardi Gras, he shows the Catholic ceremony of people getting ash placed on their heads for Ash Wednesday. From there he shows people living their lives, whether that is a man digging ditches, catching frogs, or kids playing their own version of baseball with a cylindrically squared stick as a bat (not too dissimilar to the type of play that Mance Lipscomb reminisced about in A Well Spent Life.)

Like with many Blank films, there is not too much dialog, and there does not need to be. The first person that speaks directly to the camera and seems aware of being photographed is a gentleman talking about making his first violin, and how he used various natural items that could be found anywhere, either in the house or outside, and it worked. This was 15 minutes into the film, and Blank only features someone when they have something to say.

The latter portion is about food and entertainment, another reoccurring Blank theme. My favorite scene is an outdoor gathering at night, where a number of locals talk about the type of meat they prefer to eat, and what sort they absolutely will not eat. Their opinions are mixed on deer, armadillo and possum, but they ate whatever was being served on that evening heartily. They drank too, and that’s when the fun begins. As the night progresses, the men start dancing and then play fighting, falling down all alongside each other. These are grown men, but this is the type of roughhouse play behavior expected of most kids. It is the booze that binds them together, and they are absolutely plastered on this night, as they likely are on many nights. It speaks to Blank’s talents as a filmmaker that he was able to capture them so relaxed and in their element.

Some of Dry Wood is not for the faint of heart. The day after the men have their fun, they kill and butcher a hog, while the women prepare it. At one point they saw the snout off of the hog, and later it goes into a meat grinder to later become headcheese. A baffled youngster wonders, “is this what is in headcheese?” He doesn’t like the response, and won’t admit whether he liked it or not.

A Cultural Celebration – Taylor Hackford gives another interview and talks about how culture is cuisine. It is first infused into food, and then into music. His piece is about both sister films, with Dry Wood being about the cuisine and Hot Pepper about the subsequent music. Hackford talks about how Blank was looking for the so called “golden moments” where people are captured with their guard down. One such example is the scene where the grown men are dancing around drunk, and there are many others 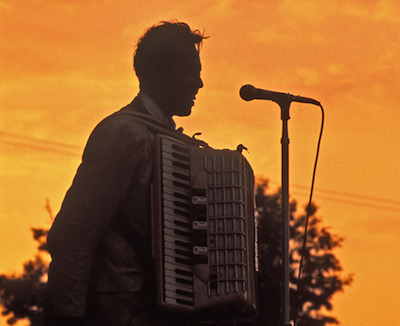 Blank goes back to the well with this follow-up documentary, which is a profile of Zydeco accordion musician and “King” Clifton Chenier. It begins with him playing a concert in Lafayette, Louisiana, and this is the music that scores the film. They cut back and forth between the concert and Louisiana life, like they do in Dry Wood. The great scenes are again when people are unaware or apathetic about the camera, and do their own thing. One cute scene has a girl playing by hanging around a street sign. There are other people that just walk by, minding their own business, some working on the railroad, some going about their day.

The best scenes are the landscapes captured with the Chenier music in the background. There is one sequence that shows a beautiful country sunset, followed by a dark night with the only visible object a pair of dim headlights. This is what Blank excels at, making the mundane appear magical.

Much of Chenier’s music is upbeat, but the most beautiful song, “Coming Home,” is peaceful and serene. It is a scene that Clifton wrote for his mother before she died, yet she unfortunately never was able to hear it. You can hear the emotion in his voice as the accordion slowly and poetically follows along. Blank focuses on landscape scenes for much of this somber scene and it becomes a meditation. We see sky scenes, birds flying, and a number of engrossing landscapes. It is easy to get carried away into this world.

While Hot Pepper has its moments, it is uneven and occasionally jarring, For example, it has a lady speaking frankly and randomly above her vagina parts. The major failing is with Chenier, who is not as captivating a subject as Lipscomb or Hopkins. The only time we see him away from the stage is when he is playing on the doorstep of a house, sitting with some friends, but he does not reveal much about himself or his world view. He just plays. 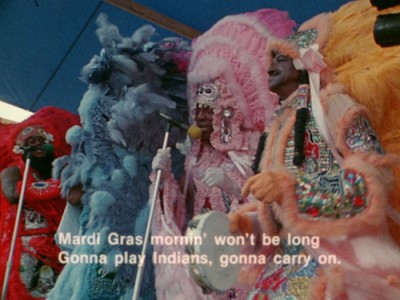 As one subject says midway through this celebratory documentary, New Orleans is the “city that care forgot.” By that he means that is the last place in America where someone can truly be themselves be free. They are free to dance around in public, drink, sing, shake their body, chant, or do whatever they desire.

The film begins with a slow funeral march through the street. As Allen Toussaint puts it, the march to the funeral is slow and that’s when the mourning takes place. The way back is when people cut up. Life goes on, and people enjoy themselves. The band members are the main line, and they perform the somber music on the way up, and the upbeat, party music on the way back. The second line are the dancers and singers, who give their old friend a send off with spirit and revelry.

The majority of this documentary shows people partying in various ways. There are people drinking up a storm on St. Patrick’s Day, with overhead shots showing a sea of green. People laugh and sing along Bourbon Street, hooting and hollering, meandering through the street moving to the rhythm of the music.

A Les Blank documentary would not be complete without food, so he takes a break from the partying to show the staple meals of New Orleans, red beans and rice being made. One expert talks about the proper way to eat a crawfish. You shouldn’t break open the shell, but just bite off the head and squeeze the meat into your mouth.

The title cards share a bit of history. Many of these traditions originated with slaves. Initially the owners would let them have Sundays off of work to celebrate. Eventually that permission was curbed, but slaves would find ways to get outside and enjoy themselves. Mardi Gras was a free-for-all, and that was when all slaves were allowed to celebrate. Thus begun the tradition that continues today of yearlong merriment with the party of the year every May.

Always With Pleasure ends on a high point, with the wild, rousing traditions of Mardi Gras. People march in the street. He shows people with percussion instruments, singing and dancing. Some people are dressed up for the occasion, while others are dressed in regular clothes, having fun just being there and singing along. “Ooh-na-nay!” they chant as part of a call-and-response mantra as they march along.

The main attractions are the Big Chiefs, some in pink feathers, some in white, some in blue. They even show a young kid wearing an elaborate costume in white, probably having more fun than he’d ever have in his life. These are the Indians and they are serious about their Mardi Gras presentations. They make their own costumes anew every year, and destroy them afterward. They are also always trying to outdo the other tribes. In doing so, they entertain themselves and everyone around them. New Orleans, at least some of the time, is where “care truly forgot.”

Lagniappe – This is a short film of 25-minutes with additional footage that was cut out of Always for Pleasure. It begins with a street band marching through Bourbon Street to a predominately white crowd, which is contrasted with much of the main feature that showcased African-Americans. We see more of musicians, like Professor Longhair, who also appeared in the main feature, who plays the shit out of some piano. A singer and guitarist do a duet together, with racy lyrics like, “if you want to feel my thigh, you gotta go up high.” Finally, there are more shots of the Indians singing. There are never enough shots of the Indians.

Celebrating a City – Interview with Maureen Gosling, who did just about everything else on this project. During the shooting, they stayed with Michael P. Smith, who was a famous New Orleans photographer. He gave Blank a lot of ideas on where to shoot. Blank was more interested in the celebrations off the beaten path, which is probably why much of the Bourbon Street parties were cut out of the main film in favor of more time with the Indians. New Orleans has parades everywhere, and they only captured a small portion of them. On the day of Mardi Gras, they spent an exhausting 10-12 hours walking down the street with heavy equipment, getting as much coverage as possible, and practically collapsed afterward.

My favorite story was how they cooked red beans and rice for people involved with the film. They even did this for special screenings. They would cook the meal and fan the scent towards the filmgoers as they watched. Their reward was they got to eat it afterwards. Now that would be the ultimate way to experience New Orleans without actually being there.