← History, Around the Corner
Hello Podcasting →

“The River had it’s own life, fishes and porpoise, turtles and birds, and people who were born and lived and died on it “ – Older Harriet

With The River, Jean Renoir is portraying two Indias. The native India is one of mystique and mystery to a westerner, but also one of serenity and a dedication to tradition. It is clear that he has fallen in love with that India (and he would later admit as much). The other India is the white upper class, post-colonial India, which Renoir may identify with as a westerner, but he seems to have mixed feelings about this India and portrays the characters as lost and confused. 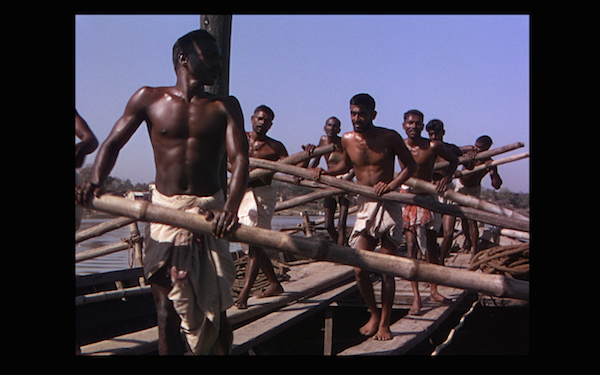 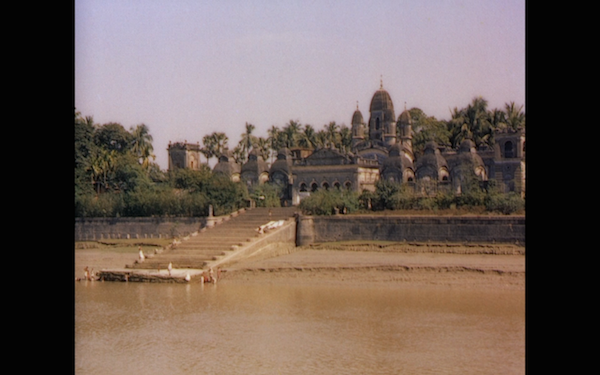 Renoir uses documentary footage to show the real India and how the people live around the Ganges. In narration, we are told about “the animals and the people who lived and died near it.” We see people working on the boats; we see playing children descending stairs that reach into the river; we see people relaxing along the banks. The river is not only a place for sustenance, but it is also a place for escapism. The river is integral to the lives of the locals. 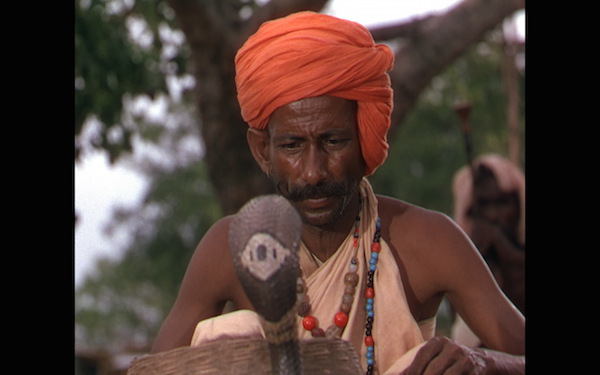 As for the English family that serves as the protagonists, they stay at arms length from the culture at which they are occupying, yet they are not disdainful. They respect and appreciate the traditions. The father prefers to walk through the bazaar on his way home and haggle over merchandise even though it is out of his way. The younger boy is fixated on snake charmers and wishes to learn their secrets. The English girls and Captain John are less attentive of their surroundings, and more concerned with their own distractions and affairs. They are “coming of age” in their own way while the river and the culture are relegated to the background.

The film has a great deal of voice-over narration, from Harriett, the English child protagonist, reflecting on her story of her first love presumably as an adult. It is her narration that we see both Indias, her insular version and the real one, yet she is educated and enamored by the true India and the magnetic lure of the river. This could mean that as part of her coming of age, she later came to an education and understanding of how special her surroundings really were, and how much the river influenced her life. 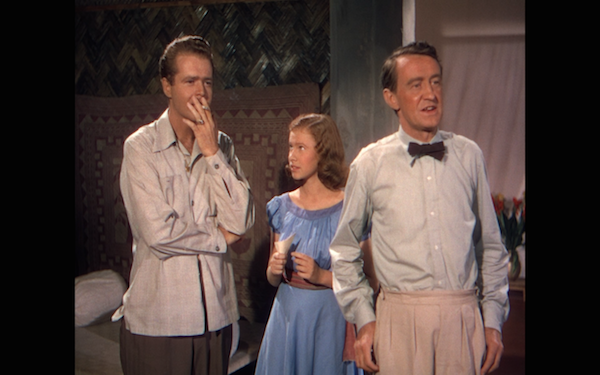 The primary white protagonists are Harriet, Valerie, and Captain John, and they form a sort of love triangle. Captain John has only one leg and is taking refuge in a foreign land as a way of escaping, a houseguest of their neighbor, Mr. John. He quickly befriends the family and the young girls. Harriet and Valerie both develop a crush on him, although they pursue it in different ways. Harriet is far too young for John, and hers is more of the fleeting girl crush. Valerie is older, who is not one of the family, but as an only child of a local businessman, she spends much of her days with Harriet’s family. She pursues John as a form of game, and she even toys with him and his affliction In one cruel scenario, she encourages John to play a game of catch and causes him to injure himself. Whether or not her heart is really into the affair is up in the air, but there is no doubt about Harriet. She is enamored by the visitor. 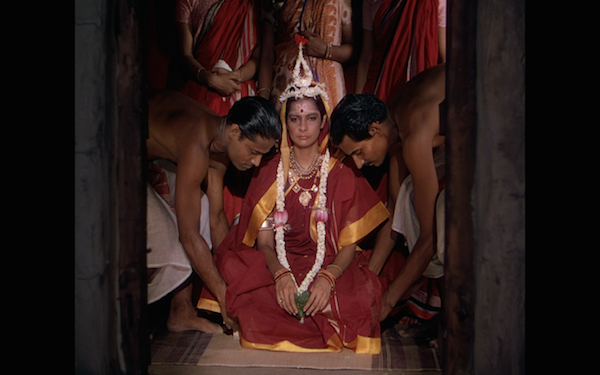 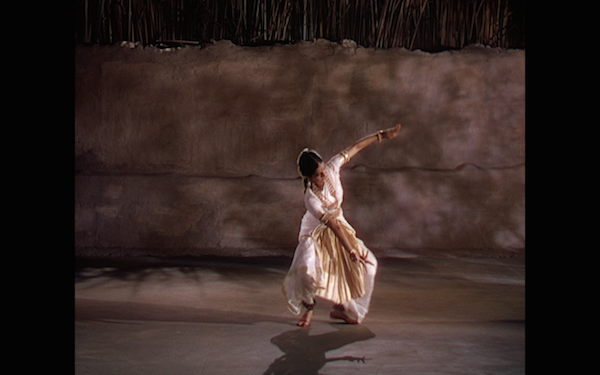 The white family has Indian connections. Dr. John has a mixed race daughter, Melanie, from a deceased Indian wife. Melanie serves as the mechanism for introducing Indian culture into the film, including a lovely fairy-tale diversion into the background of the God Krishna. Melanie also represents the contrast of both cultures. She has an English-centric upbringing, but as she gets older, she embraces her native culture. She even insists on wearing a Sari permanently. Bogey, Harriet’s younger brother, has a young Indian friend who encourages his foray into Indian culture and will be present for a later, game-changing scene. 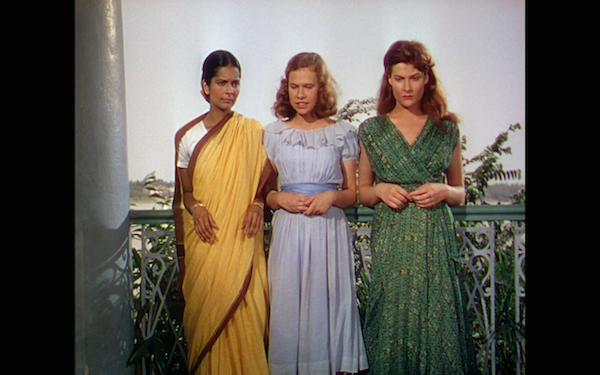 These younger characters are all lost in a foreign land. In this way Renoir seems to be contrasting the privileged white class against the comfortable locals. Harriet is lost in love, which is a fruitless pursuit given the age difference. Valerie is lost in herself, and is more capricious as a teenage, only child, yet that does not seem to be an aspect of her person that she is proud of. Captain John is completely lost. He is coming to terms with his loss of a leg and being less of a man after the war, and has wandered from place to place, unsuccessfully trying to find somewhere he belongs. The least lost is Melanie, although based on her multi-cultural upbringing, she could have been portrayed as being the most confused. Even though in one sequence, she says to her father “someday I shall find out where I belong,” but she appears to have found it. She is resolute in embracing her native culture, while still embracing the love for her father and friendship with Captain John. Even though she is not squarely placed within the love triangle, it seems most appropriate that she end up with the visitor. 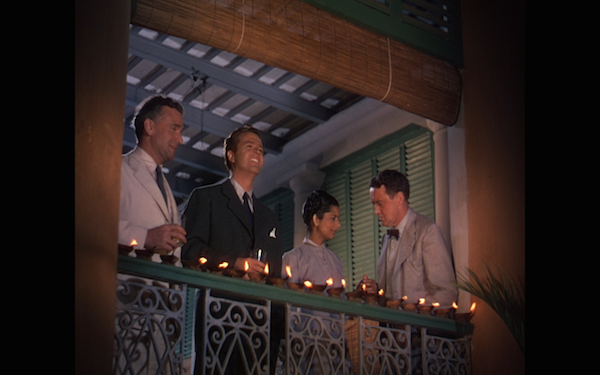 The heart of the movie is when the Indian traditions are shown. Here Renoir slows down the pacing and backs away from the narrative. It shows the real India, while also fragmenting the movie. The foolish meanderings of the young girls and their rivaling affections for Captain John seem to be insignificant compared to the beauty of the culture around them, which has been around for thousands of years compared to the teenage years of Harriet and Valerie. The previously mentioned Krishna story and the Hindu Festival with 100,000 lamps are when the film is the most pleasant, relaxing, and the most beautiful. Even though the coming of age stories are interesting, they pale compared to the story of the real India that Renoir puts so much care and love into showing us.

It is worth mentioning that Satyajit Ray and Subatra Mitra worked as Assistant Directors on the film. They were undoubtedly influenced by the work, and even though their later work would be unquestionably Indian, you can see some of the pacing and the mixture of documentary footage with narrative in their narrative films. I can see a lot of similarities between The River and The Apu Trilogy. The Renoir film is worth praise in its own right, but it also deserves credit for influencing the career of the man who would be called “The Father of Indian Cinema.” 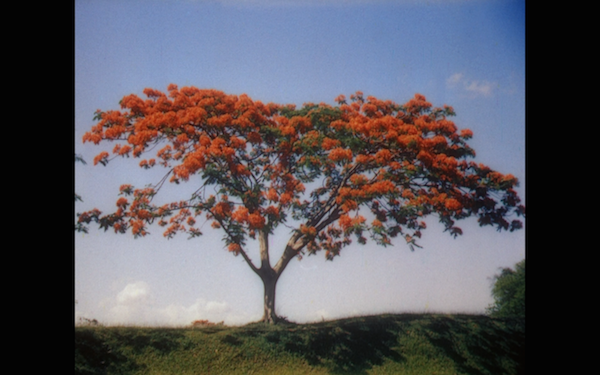 The idea came to him when he was reading book reviews. He saw a glowing review of a book about India. He read the book and was convinced. All of the studios rejected him, thinking that a movie in India required tigers, Bengal lancers, or elephants. He then met an Indian florist that wanted to get into film. It was difficult at the time because Europeans and Americans did not understand Indian issues, so they had to film India through English eyes.

He heard about Rumer Godden, who was English but was born and lived in India. Renoir acquired the option before they met. They flew to India to make sure it was acceptable to shoot there, and Renoir was bowled over. He loved the country.

He went to movies with his father during his childhood and he describes this as one of “the most formative” experiences he had, and he compares it to The Red Shoes as the two best classic films in color. It was the first Renoir in color and the first Indian film in color.

India had a terrific canvas for color primarily because of the vegetation on the bank of the river. Many of the scenes he thought were reminiscent of a watercolor painting by Renoir’s father. Renoir apparently took a long time to arrange shots in a certain way, so possibly that was because of his father’s visual style.

Around the River: 2008 documentary about The River by Arnaud Mandagaran.

In a 1958 biography, Renoir called The River the favorite of his films. After Rules of the Game failed, he left France, made six films in the USA and then RKO dropped him after the failure of The Woman on the Beach. He left for India in 1949.

Kenneth McEldowney, producer, talks about his experience behind the film. He was first looking at one book, then that author recommended The River. He found that Renoir had the rights although he was not going to do anything with them. Renoir’s only condition was that he get a paid trip to India to make sure he wanted to shoot there, and he fell in love. Rumer Godden had also written Black Narcissus, and hated that it was shot entirely in a studio. She wanted Renoir to shoot in India.

Satyajit Ray worked up courage to ask for Renoir at hotel reception desk. He told the famous director that he was a great admirer of his, and Renoir was very nice. Ray “pestered him with questions, but he was very patient.” Asked him about French films, his father, and just about everything he could think of. Ray told him that he would like to make a film and described Pather Panchali.

Alain Renoir – His father had problems with the screenwriters. They would write something, and then he would film something completely different. Most became infuriated with him. Rumer Godden was the exception because she knew the country and the culture. This was one of the few occasions that Renoir and the writer collaborated well.

As for the Indian elements, they were unquestionably Renoir. He saw Rahda dance and wanted to meet her. The role of the mixed race Indian was not in the book, but was invented to bring more of India into the film and cast Rahda as Melanie. They found from the previews that Captain John was not sympathetic and the children acting was not as strong, so they over-emphasized the cultural moments and river sequences, which I think turned out to be a good move.

Water was a metaphor for life in Renoir’s work, and this was quite a good fit for him. He had been criticized for not returning to France after the war, but after The River, Renoir considered himself beyond nationalism.

The River was always his favorite because it finally made him an international director.

At one ceremony for Ray, it was said that Ray owed everything to Renoir. The elder director scoffed and said he owed nothing to him, and that he was the father of Indian cinema. Ray’s reaction was not recorded, but he later named Renoir as one of his major influences.

← History, Around the Corner
Hello Podcasting →