The Shining and the Family: Women at Work

During the late 1970s and early 1980s, the topic of women’s liberation and the female role in the workplace was frequently and intensely debated. Like many political issues, the topic was divisive and controversial. The argument would manifest itself in pop culture and visual media. The Shining is an interesting piece of filmmaking because it constantly addresses social issues, and this is just one of them. It is most effective when negotiating the structure of the family and investigating the source of dysfunction. The movie comes out clearly against placing women in the workplace, claiming that in doing so, parents choose their own careers over responsibility for their children. Their absence from the child’s life, as is the case between Wendy and Danny, results in the child being exposed to dangerous influences that will disrupt their growth. The movie uses horror cinematic elements in order to make its case. 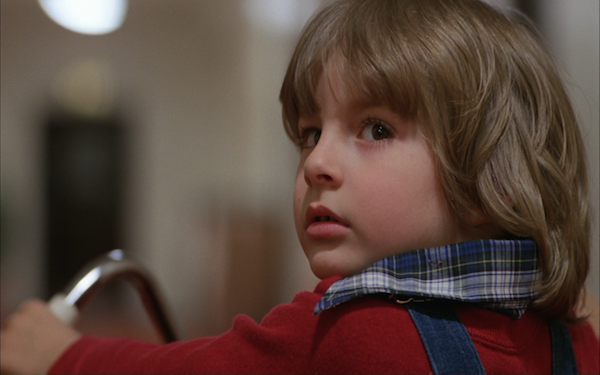 Many scenes in the film can be used to demonstrate this argument, but one that is particularly revelatory is when Danny Torrance interacts with the supernatural and enters the forbidden room number 237. The scene results in Danny being accosted by supernatural forces, injuring his neck. It comes at a significant point in the movie, taking place just after an uncomfortably awkward scene where Jack Torrance promises his son that he loves him and would never harm him. In the scene afterward, Wendy accuses Jack of violence towards their son. This sets in motion the course of events that will result in Jack attempting to murder his family.

The sequence takes place on a Wednesday, as shown by the title card, however we are not certain which Wednesday. It could have been a week or a month from the previous scene. All we know is that a period of time has elapsed, and judging from the intrusive editing and how the title card appears to be thrust onto the screen, the upcoming events are not going to be pleasant. This particular day of the week is significant in terms of the working mother argument because it is takes place in the middle of the business week, where the traditional father is away at work and the child is cared for by the mother. We will see shortly that things are different at the Overlook hotel.

Following the title card is an establishing shot that gives us an exterior view of the hotel. The camera is looking up from the bottom of a snow-covered hill, with trees bordering each end of the frame. The middle of the hotel is framed by two lone trees, a little ways apart from each other. To the left of this framing, we see a set of lights on. The light to the far left illuminates two windows. This is Jack’s work area where he is currently having a nightmare. Also on the left of the frame is another light, which is where Wendy is busy checking the boilers and making sure that everything in the hotel is functioning. She has taken on Jack’s role of caretaker, ignoring her child in the process. The only other light is on the other side of the hotel. This is where Danny is playing, hundreds of feet away, out of sight and earshot from his parents. The two trees in the middle of the frame are used here as a measuring device. They give us a visual representation of the physical distance between parents and child, and in a glimpse, how they are not able to prevent a horrific event from occurring.

We then cut to Danny playing with miniature cars and trucks on the hotel floor. The toy vehicles are colored either pink or blue. These colors represent gender roles, which in this case are his absent parents. There are five pink colored cars compared to three blue cars. The color of the cars here indicates the gender struggle in raising Danny, but by having pink being the dominant color, the movie is giving a visual cue that the female should be caring for the child. From out of nowhere comes a pink tennis ball. It interacts with Danny as he is playing with a toy car in each hand, one blue and one pink, hitched together. The tennis ball interacts with his play by slowly rolling into the center of the two cars, essentially dividing them.

The pink tennis ball is implying a gender interaction. It is breaking up the male-female balance with another feminine element, the origin of which is unknown at this point. It could be his mother or perhaps one of the specter twins that he has seen around. The music is frightening. Several instruments play a single, sustained note together, somewhat out of tune, which follows with silence and then repeats the same note again. We, the viewer are meant to expect that something sinister is happening. We would think that Danny, with his psychic abilities that have already warned him of evil forces throughout the hotel, would also suspect something dangerous lurking. At first, when he looks for whoever rolled the ball, he does appear to be a little frightened. The look on his face is inquisitive, showing that he detects something is amiss, and he takes a few labored, deep breaths. 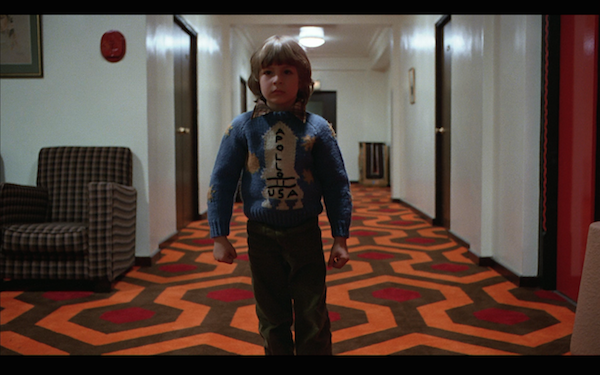 When Danny is taking his deep breaths, his body language shows aggression. He is poised with his arms by his sides. His posture looks imposing, as a martial artist or street fighter might look before engaging in a battle stance. We can also read ignorance from his demeanor. Again, the audience suspects that the tennis ball rolling could be a threatening gesture. Two ghost children have already asked him to play with them forever and ever, implying that he die and haunt the hotel with them. Therefore we associate this attempt of innocent play as something to be frightened of, but his actions are not falling in line. Had Danny’s mother been around, she undoubtedly would have led him away from the potential horror. The film is claiming that her irresponsibility is what put Danny here in the first place.

There are several reminders of how alone Danny is on this hotel room floor. In between close ups of Danny’s reaction, we see long shots of the hallway from in front and behind Danny. Behind Danny are just one or two rooms. In front of him are four rooms, but the way the hallway is photographed make these four rooms seem a mile away. Danny is out in the middle of nowhere, completely vulnerable – a little kid on the moon.

Danny’s fear lasts for only a moment before a destructive curiosity takes over. Who rolled this tennis ball? Danny indicates that he thinks it is his mother. He calls out for her as he stands there, still in his aggressive stance. Of course there is no answer. He slowly moves forward and calls again for his mother. His fright has left him. His breathing appears normal. He is now curious as he moves forward. His mother, if given a voice, would stop his advance right there and send him in a different direction. We get a visual reminder of his other options, as there are labeled exits just to the side and behind him, but Danny presses forward. 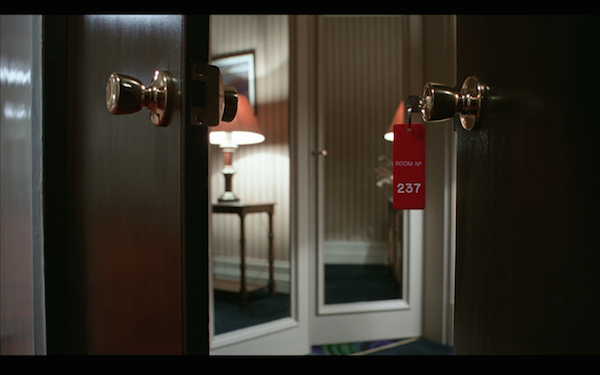 The camera changes to Danny’s point of view as he walks, moving from side to side and bobbing up and down. We see the open room door, the dangling room key and we head straight for it. The eerie music continues, constantly warning us that we are heading for something unpleasant. Danny continues until the room key becomes visible. This is the ill-fated room 237, the same room that Dick Hollorann warned him not to go near. The doorknob with the blood-red key ring is at eye level with Danny and the camera, still in first-person view. Danny stops for a moment in front of the room key and calls again for his mother, this time asking if she is in the room. By addressing her again, he reminds us that her absence is irresponsible.

Once Danny and the viewer get a glimpse of the inside of room 237, the scene dissolves to Wendy going about her work, checking the boilers and other machinery. The choice to dissolve here is interesting. This was not used for any of the other cuts. Kubrick is saying something here. The room has been developed to be an evil, ominous place. Once we get a look at it, we are placed back into Wendy’s workplace. On top of that, Danny is calling for her, expecting her to be inside the room. By using these techniques, we are being given the horror of room 237 and the idea of a woman working and neglecting her child on the same level. Adding this up, we understand that it is the fact that the mother works that is evil.

In case the audience is not sure of what is being said, it is immediately clear as Wendy’s scene unravels. As she is going about her work, she hears a scream. Having been with Danny for the past minute-and-a-half, we expect it to be his scream. We find out that it is Jack’s. Wendy runs for him and discovers that he has had a horrific dream, one in which he kills Wendy and Danny and chops them into pieces. Wendy takes on a motherly role with Jack, but not her son, who we know has undergone his own horror. His is real, whereas Jack’s is imaginary. We meet up with Danny shortly and find that he is injured. Since the mother was not there, she does not know how or why this occurred. She places blame on Jack, which completes his transformation that brings events to a climax.

With this short scene, Kubrick is making a statement about the role of parents in a child’s life. He feels that the mother should be the caretaker for her child, and she is solely responsible if anything goes wrong. He uses several cinematic elements and horror film conventions to drive his point home, including clever editing, scary music, symbolism within the mise-en-scène, and the cinematography. This same idea is corroborated by the plot and dialog of the movie, and is resolved scene after scene. In essence, the movie is about the dysfunctional Torrance family and who is to blame for their unraveling. Kubrick is arguing that if Wendy and Danny stuck together, they would have avoided, or at least minimized, the abuses inflicted by an unstable father.